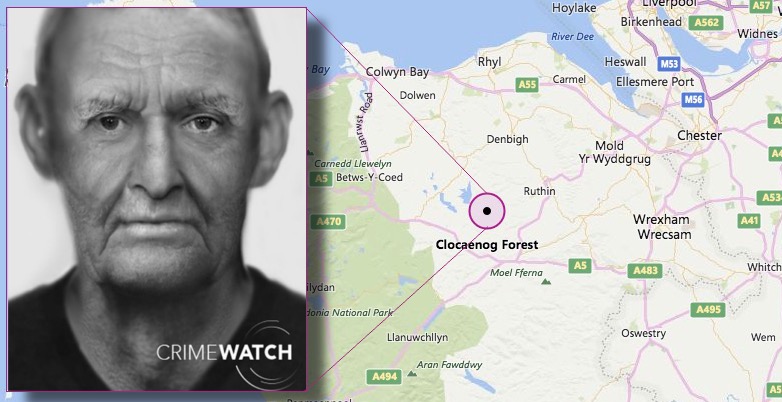 Police have renewed an appeal to identify a murder victim three years after his remains were found in a forest near Ruthin.

The body of a man found in Clocaenog Forest in 2015 – now detectives have released a video into the circumstances of the case.

Senior Investigating Officer, Detective Superintendent Iestyn Davies of the Major Incident Team said: “It’s been three years since the body of a man was found in Clocaenog Forest. He remains unidentified.”

During the course of the video Det Supt Davies and Det Sergeant Laura Griffiths provide information which will hopefully lead to someone making that crucial link and help identify the victim.

Late that evening a spectator found what he considered to be a human skull within wooded area of that forestry.

North Wales Police were alerted and the pathologist later confirmed the remains to be human. Over the following three weeks the almost complete skeletal remains of a man were recovered from the location.

The Post Mortem examination revealed the man had been murdered and the location from where he was recovered was a likely deposition site. Some of the injuries sustained were as a result of blunt force trauma to the skull.

The Post Mortem also provided a number of significant features about the body.”

Det Sgt Griffiths said: “An estimated age can be given to the bones, we can say that this man was at least 54 years of age when he died but likely to have been over 60. We know that he was about 5”10 and that he was probably a well-built man.

It also identified older fractures to the body as well as medical conditions.  This man had sustained a fracture to his nose at some stage in his life; he suffered from Osteoarthritis and had fusion in his vertebra.

Both these conditions would likely have caused him pain in his affected joints and reduced movement during life.”

She added: “We found fabric remains close to the body and subsequent enquiries identified that they were that of a large size green Pringle jumper, which was sold between 2000-2004.

We also found a label for a pair of Marks and spencer’s men’s briefs in a dark red colour. This was for a waist size of between 36”-39” and was sold between 1999-2000.  I must stress, however, that we cannot categorically link these items to the body but they were found in very close proximity.”

Det Supt Davies continued: “The most important evidential clue that we have in this case is that forensic scientists were able to obtain a full DNA profile from the body.

Dr John Rosie, a forensic odontologist examined the teeth of the victim and further tests by a specialist in radiocarbon dating, identified that this man was born before 1950.

A facial reconstruction of the skull was also conducted by Prof Caroline Wilkinson to see if a likely image of how this man looked in his living years.

Examination of the roots found near to where the body was recovered provided a closer time frame as to the likely period in which this body was deposited at the location.

“We are prioritising the period between 2004-2010.  I stress however that this is our priority period and we are not ruling out that the victim was left at the location prior to 2004.”

Based on all the evidence collected we have a really effective means of eliminating names put forward in this case and would therefore encourage anyone who thinks they know the true identity of this man to come forward.”

A closer aerial image illustrates the isolated location where this body was left, and Det Supt Davies asked: “Did the person or persons responsible have some sort of previous knowledge of this area; is it potentially somewhere they had visited previously?

It is a location where the Wales Rally GB formally the RAC rally has been held for many years and Llyn Brenig, which is close by, has been a popular sailing reservoir attracting thousands of visitors over the years.”

Sgt Griffiths concluded: “We would encourage you to consider all the information and clues as to the identity of this man and if you think you can help in any way, please contact us by phone on 0300 330 0101.”

You can also access the police media portal where you can leave us a message which will go directly through to the investigation team.