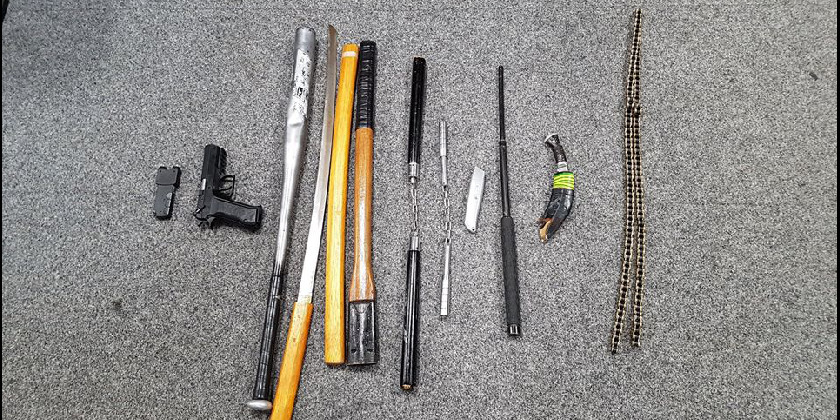 North Wales Police has seized a number of weapons in the Flintshire area today which they believe have been used during violent disorder incidents locally.

Among the haul was a metal baseball bat, Samurai sword, martial arts weapons, heavy duty chain and a pistol, though its unclear whether it’s an imitation firearm or a real one.

A spokesperson for the North Flintshire Police team said:

“Flintshire residents, the following weapons have been recovered by police today; we believe that at least two of them have been used in local incidents of violent disorder.

Off the streets for Christmas, a little gift for all of us.”

Officers from North Wales Police have been involved in a separate operation in the past week with colleagues from Cheshire, Cumbria, Greater Manchester, Lancashire and Merseyside forces in a bid to crackdown on knife crime.

Officers seized a total of 180 knives, swords and other prohibited weapons during the targeted activity coordinated by the North West Regional Organised Crime Unit (ROCU).

Over 100 cease and desist letters were issued across the North West.

This follows a month of activity where specialist officers intercepted parcels containing knives and weapons, which are illegal in the UK.” Police have said.

Officers from the ROCU’s Regional Disruption Team (DT), which specialise in disrupting organised crime networks, worked with the six North West Police Forces – which includes North Wales Police – alongside Border Force, Royal Mail and other agencies in a bid reduce the number of illegal weapons being imported into the North West from overseas.

Detective Superintendent Ryan Davies from the North West ROCU said: “Thanks to this intelligence-led, co-ordinated operation a significant number of knives and weapons have been seized and won’t make it to the streets of our region, where they can cause serious harm.

“This operation is a powerful example of how collaborative working is making a difference in the fight against serious and organised crime in the North West.”

“Be warned, anyone who is thinking about buying knives or weapons either online or by any other means from overseas. You are committing an offence by bringing them into the country.  You face the full force of the law if you do so.”