Plans to build a new block of flats in Holywell will improve the appearance of the town centre, it’s been claimed.

An application has been entered which could see nine apartments created on an area of concrete land at Raven’s Court, which is located behind the High Street.

Permission was previously gained by Ron Parry, who owns the site, to put four flats and one house on the same area.

However, consent for the original proposals has now lapsed and a new scheme has been outlined in its place.

An architect acting on Mr Parry’s behalf said the current state of the conservation area the site sits within was in need of improvement and the fresh plans would make better use of it. 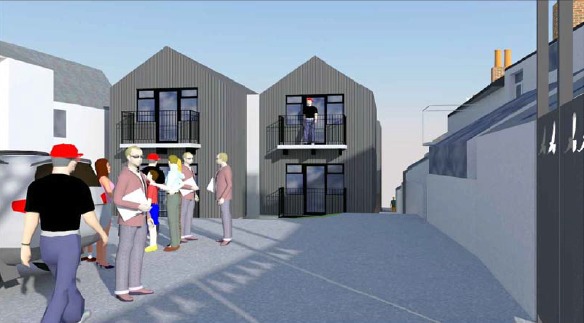 In documents submitted to Flintshire Council, Adrian Waters said: “From the bypass the view of the conservation area is not flattering.

“What is seen is a collection of left-over derelict spaces and the backs of some utility buildings.

“There are rare glimpses of the rear of some of the three storey buildings on the High Street.

“Accordingly, there is an opportunity at Raven’s Court to significantly improve the view into the area.

“Particular attention has been paid in this proposal to improving the outlook from windows within the walls of The Mews that bound Raven’s Court and not impinging on their light.

“Other adjacent buildings that overlook the site will also benefit from being able to look out onto a well-designed development.”

He added the two-storey building had been designed to fit in with others nearby and would include six parking spaces.

If approved, Mr Parry has outlined his intention to sell the site on to a developer.

Planners from the local authority are aiming to decide on the proposals by the end of December.