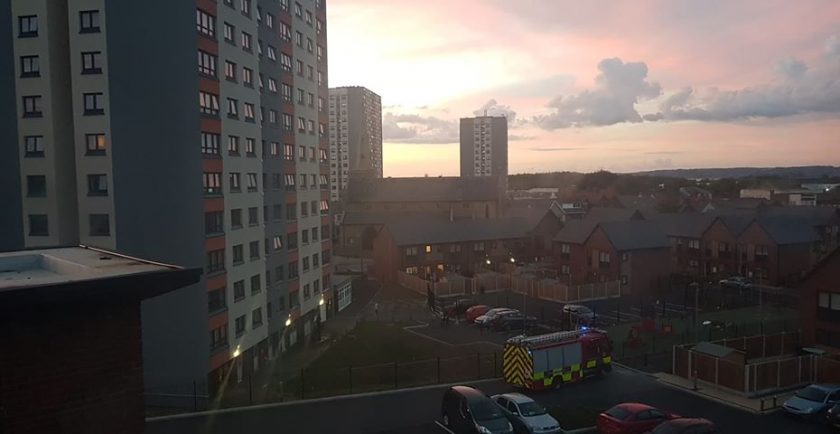 More than a dozen flats at Bolingbroke Heights, Flint were left with water damage following a fire which set off the sprinkler system.

North Wales Fire and Rescue Service crews were called to a report of a fire at the high rise block on Friday evening.

Appliances from Flint, Deeside and Holywell were sent to the incident.

The fire was confined to a cooker within an eighth floor flat and was extinguished quickly by the sprinkler system.

Firefighters rescued a pensioner from the heavily smoke logged flat. he received a precautionary check up for smoke inhalation at the scene.

The fire service said the incident “clearly highlights the importance of the sprinkler system” – which was installed throughout Bolingbroke Heights in 2016 –  and “helped to avoid the spread of fire.”

The sprinklers did, however, cause widespread damage within a number of flats according to a resident.

We were told that “at least six flats” as far down as the third floor suffered “major water damage.”

Two flats on the seventh floor were so badly damaged by water from sprinklers, the occupants had to be rehoused, said the resident, who didn’t want to be named.

Those flats will need redecorating and furniture, beds, bedding and carpets have been severely damaged beyond use.

“Flintshire worked closely with the fire service and the successful activation of the sprinkler system ensured the immediate incident was dealt quickly.

Our officers acted quickly and were on site in minutes, ensuring that everyone was safe.

We continue to work with those most affected by this incident and hope to have everything back to normal as soon as possible.

We would like to thank our tenants for their patience, understanding and cooperation.”

Paul Scott, Senior Fire Safety Manager at North Wales Fire and Rescue Service, said: “This incident clearly highlights the importance of sprinklers in helping to avoid the spread of fire.

“The fast activation of the sprinkler system helped to protect the occupier of the flat from serious harm, as well as avoiding damage to his flat and major disruption to the remainder of the building and its occupants which may have been caused had the fire spread.”