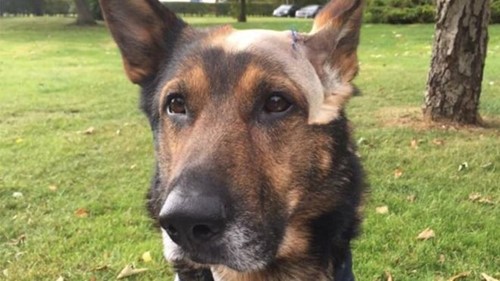 The new law means causing unnecessary suffering to a service animal is now an offence in England and Wales.

It also makes it harder for those who harm service animals to claim they were acting in self-defence.

‘Finn’s Law’ was inspired by German Shepherd Finn, who was stabbed whilst trying to apprehend a man in Stevenage, Hertfordshire in 2016.

Finn’s handler, PC Dave Wardell of the Bedfordshire, Cambridgeshire and Hertfordshire Dog Unit had been called to reports of a robbery.

During the pursuit of the suspect, PC Wardell released Finn with a command to detain the suspect.

The suspect attempted to jump over a fence but Finn kept pace and was able to take hold of his leg.

Finn was stabbed in the chest and head and despite this, did not let the suspect go until reinforcements arrived.

PC Wardell was also stabbed in the hand. It was initially thought that Finn was unlikely to survive but he recovered and was back on active duty 11 weeks later.

The 16-year-old suspect was charged with actual bodily harm in relation to PC Wardell but only faced criminal damage charges over the injuries to Finn.

Since then PC Wardell has been campaigning for better protection for service animals and for an amendment to the Animal Welfare Act 2006.

Sergeant Howard Watts of the North Wales Police Dog Section said: “After years of campaigning it’s fantastic to see something so positive come to fruition which recognises the importance of police dogs in our family.

“Our dogs, their handlers and colleagues run toward danger and do some amazing work 24 hours a day, seven days a week to help protect us from harm. It is only right that the animals are seen as more than property.”