A deadly fungus which attacks one of the most common trees in Flintshire is now endemic in the county the local authority has revealed.

Up to 24,000 trees in Flintshire near buildings, roads and railways could be affected.

Ash dieback originated in Asia and is thought to have been brought to the UK on imported trees and was first identified in Britain in 2012.

It is most significant disease to affect trees in the UK since Dutch elm disease and has the potential to infect more than two billion UK ash trees and lead to the death of approximately 90% of them.

Despite the UK Government prohibiting the movement of Ash for planting in 2012, the disease has developed rapidly.

Ash dieback was first confirmed in Flintshire on the A55 at Northop by Forestry Commission plant health staff in 2015.

In 2016 it was found in a woodland near Rhydymwyn on ash that had been cut down underneath overhead power cables.

In a report to be presented to Councillors in Flintshire on Tuesday, the authority’s chief planning officer, Andrew Farrow said members of the public will be concerned about the disease and ash trees that they may own.

He said, “The national media have extensively covered ash dieback in the parts of the country where it was first found but it is not appreciated that it is now in Flintshire.

It is evident that since being initially recorded ash dieback is now endemic in the county and now widely distributed along the Alyn and Wheeler river valleys, the Dee coastline, Greenfield Valley and A55 trunk road.

The disease’s effects are not currently obvious in Flintshire.

There is a need to make the public aware that ash dieback will have a major effect in the county but in several years’ time.”

Ash is widely distributed and one of the most abundant trees species in Flintshire especially where the soil is calcareous over the county’s limestone geology. 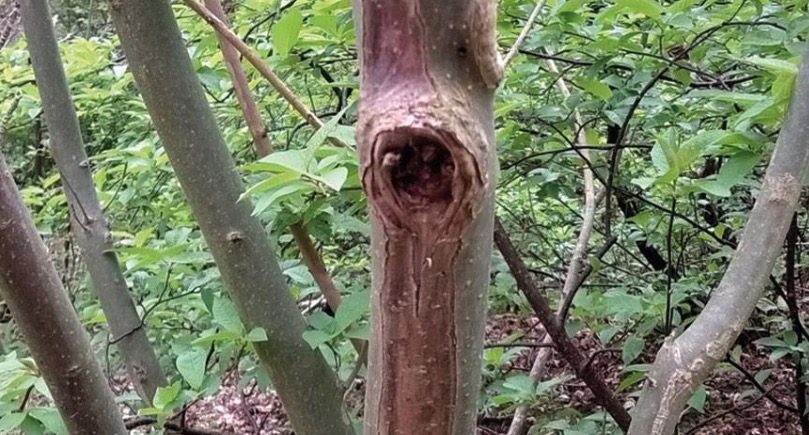 It is estimated that Flintshire has approximately 24,000 ash trees growing outside the woodland environment adjacent to the highway.

The report goes onto say, “It is predicted that the ash dieback will have a significant adverse effect on Flintshire’s landscape.

The disease will reduce biodiversity and weaken environmental resilience.

Protected habitats such as the Alyn Gorge Special Area of Conservation (SAC) and the landscape of the Clwydian Range and Dee Valley Area of Outstanding Natural Beauty (AONB) will be particularly vulnerable to disease’s effects.”

An ash dieback action plan has been produced by Flintshire Council, it says that resources will be prioritised to address the areas at greatest risk.

“These are the stretches of the highway network which have the greatest vehicular and pedestrian traffic where a tree falling onto the footway or carriageway is more likely to strike a vehicle or pedestrian.

“Felling will occur when an inspection deems a high risk of failure.”

A significant proportion of the 24,000 mature ash trees are growing next to Flintshire’s highways and are on predominantly privately owned land.

“Assuming a worst case scenario in which 90% mortality rates are experienced and based on a figure of £400-£800 per tree, the potential cost to private and public landowners, especially the farming community is estimated to be in the region of £1.2m – £5m.

It is currently estimated that the cost of removing Flintshire Council owned trees adjacent to the highway to be £344,000.” The report states.

The council hopes that Welsh Government will make a grant available to tackle the disease, “but currently there is no provision.”

Mr Farrow says: “Where it is necessary to remove or make safe infected trees on FCC highway land the work will need to be funded by the Council.

As the council does not have a specialist tree gang capable of undertaking the removal of mature trees, contractors will need to be employed to carry out this type of work.

In addition to the cost of the tree works, it is expected that in most cases the removal of mature trees will require traffic management (e.g. traffic lights, cones) so that the works can be carried out safely.

In addition to the financial pressures on landowners, including FCC, there will be an initial shortage of trained and insured tree surgeons capable of under taking the work, especially dangerous trees adjacent to the highways, electricity lines and railway tracks.

One of the issues highlighted by the Tree Council was that rogue operatives will cause further problems and endanger themselves and/or their clients.”

The council says its budget is “not expected to be robust enough” to deal with the ash dieback issue.