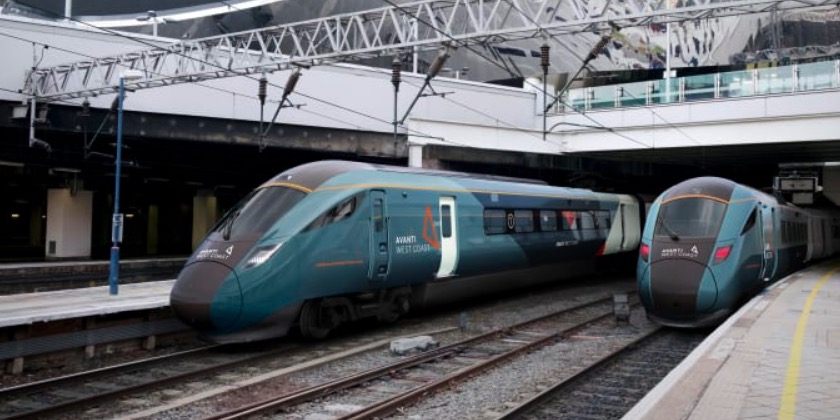 The familiar sight of a Virgin Train thundering through Shotton Lower Level Station has been consigned to history as new operator Avanti takes over the West Coast franchise.

The new West Coast rail franchise begins today – Sunday December 9 – taking over from Virgin Trains, which has run services between London and North Wales for the past 22 years.

Avanti is Italian for “Forward” – their logo is a bright orange triangle, “symbolising the geographic extent of the 400-mile long route that serves cities like Birmingham, Manchester, Liverpool and Glasgow as well as London and North Wales.” The company said.

Under the new West Coast Partnership, First Trenitalia said it is “committed to delivering a range of passenger enhancements for InterCity West Coast services.

The company awarded a contract worth more than £350m to Hitachi Rail last week to provide and maintain 23 new intercity trains – 135 carriages –  to be built at its County Durham factory.

Bringing additional capacity to services along the West Coast Main Line and in North Wales, the new, state of the art intercity trains will start operating in 2022.

We’re proud to serve the West Coast. Our Spark orange triangle celebrates the connection our network creates between three great nations. It’s a constant reminder of how many people rely on us to provide the best service possible. pic.twitter.com/FYsfLoFbXi

The trains will be a mix of ten seven-carriage electric trains and 13 five-carriage bi-mode trains, with the ability to switch seamlessly between electric and diesel power.

The electric trains will operate between London, the West Midlands and Liverpool while the bi-mode version will serve the London to North Wales route.

These are fast-accelerating 125mph trains which draw from their Japanese bullet train heritage.

“As a result of their modern design, passengers will enjoy a quieter journey compared to the diesel-only trains they will replace.” First Trenitalia said.

Andrew Barr, Group CEO, Hitachi Rail, said: “Based on Japanese bullet train technology, our new trains have proven to be the modern intercity train of choice, increasing passenger satisfaction wherever they run.

We’re delighted to continue our excellent relationship with FirstGroup and Trenitalia, for whom we’ve delivered hundreds of trains across Italy and the UK. This new order, which will be built at our factory in the North East, is another vote of confidence in the success of our trains, which are both green and reliable.”