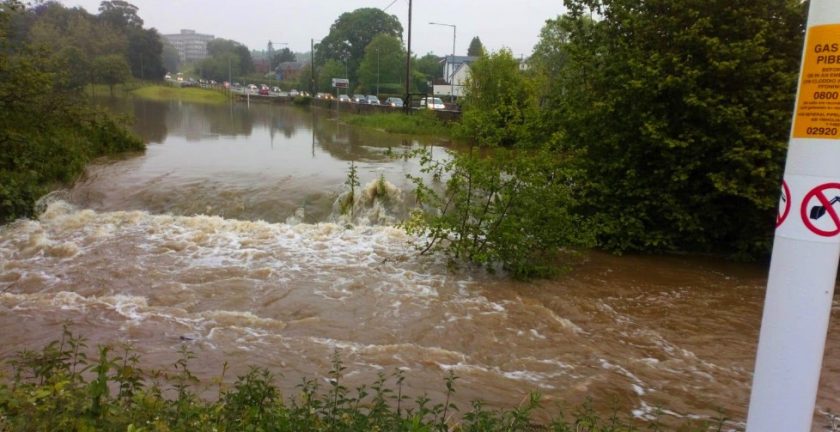 Road Closures in place this morning:

Bretton Lane B5129 – Behind Airbus to Sandycroft Bridge

A yellow weather alert – issued by the Met Office – warning of heavy rain in Flintshire remains active until Thursday.

A complex area of low pressure across the UK which brought rain over the last two days will continue to feed in further bands of heavy and slow moving rainfall over the next few hours.

Nearly a months worth of rain has fallen in Flintshire in the past 48 hours and forecasts say we will see more heavy showers pushing into north Wales overnight and into Thursday.

The @metoffice has issued further weather warnings with heavy rain in #AlynandDeeside for today & tomorrow with further risk of flooding & transport disruption.

“Since the early hours of this morning, North Wales Police have been extremely busy in the eastern area of the force assisting the public and supporting partner agencies due to major flooding.

During this time, our control room has received a high volume of calls.

We expect the weather to deteriorate again this evening and overnight with more heavy rain forecast.

We urge people to consider whether they need to make any journeys tonight, as we already have a number of roads closed, which is having a major impact on our road network.” 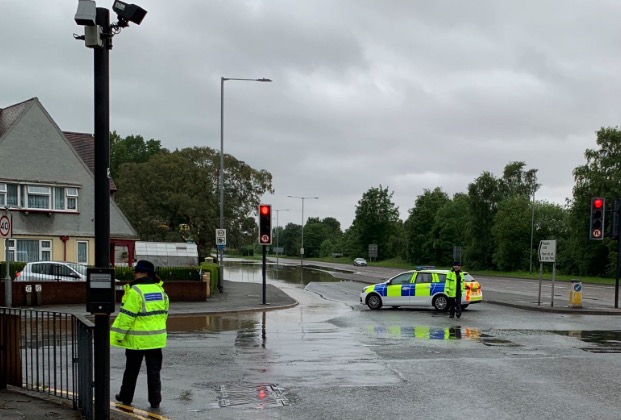 [A548 closed today due to flooding – Photo: Flint CRT]

Several roads were closed during the course of the day but most appear to have reopened though traffic reports say Seahill Road both ways from Church Road to Old Sealand Road (St Bartholomew’s Church) is partially blocked.

Bretton Lane both ways from Lesters Lane to Chester Road is partially blocked due to flooding.

A number of roads around Sandycroft are affected by flooding.

A548 both ways from A5119 Aber Road to High Street is partially blocked.

A540 Parkgate Road is closed both ways from A5480 (Texaco Roundabout) to Townfield Lane. 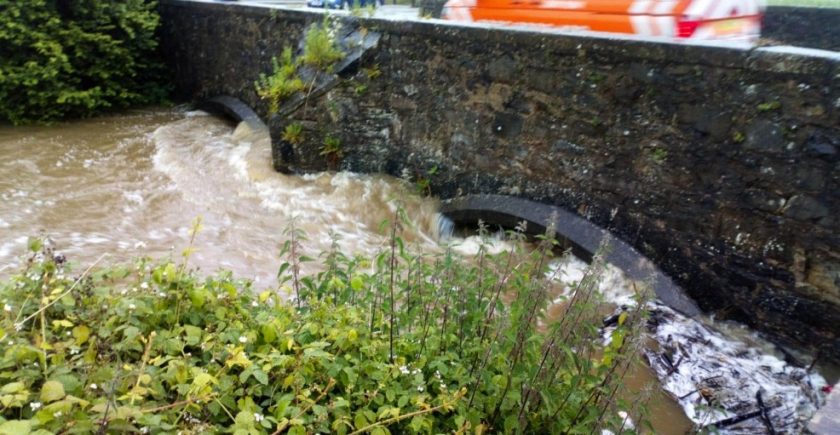 The River Alyn at the A5119 next to the Bridge Inn in Mold – Photo: Adele]

Matt also captured video footage of the River Alyn as it flows under the A5119 in Mold.

Despite earlier traffic reports the A5119 into Mold was impassable, both the A5119 and Bro Alun remained open and the river didn’t top the banks.

Flint Coastguard volunteers were called into action this morning as part of  Civil Contingencies for local flooding.

“The team liaised with North Wales Police to identify and assess flooded areas as part of the contingency planning.

Area’s in Flint, Bagillt and Greenfield were checked.

Water levels have fortunately receded since early morning but with more rain expected throughout the evening and tomorrow morning the Team remain on standby, the situation will be re-assessed later on this afternoon.”
Flint Coastguard Rescue Team has issued advice to those in flooded area’s:
-Do keep watching and listening. Stay alert, events can change very quickly during a flood. Keep an eye on the weather and listen out for warnings on the radio and TV.
-Do be careful. It is tempting to stand on walls and bridges to see what is happening but it is all too easy to slip and fall in.
-Do move people and pets upstairs or to higher ground.
-Do listen to local radio and TV for announcements. If the flooding is serious the emergency services and your local authority may decide to evacuate you. Do exactly what they tell you. Remember to take supplies such as medication with you, you may be away from your home for a while.
-Once a flood is in progress, it is advisable not to do the following:
-Don’t drive through floodwater. Two feet of flowing water is enough to sweep your car away.
-Don’t walk in floodwater that is above knee level, it can easily knock you off your feet. The water could cover open manholes, road works or objects and you won’t be able to see them.
-Don’t touch items that have been in contact with the water. Flood water is likely to be contaminated and could contain sewage. Disinfect and clean thoroughly everything that’s got wet.