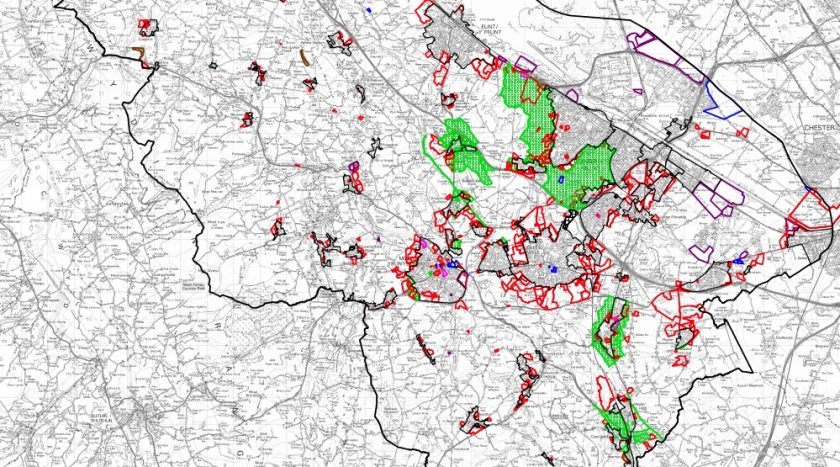 A master plan for 7,000 new homes in Flintshire has taken a major step forward despite concerns about whether the county has the infrastructure to support the growth in population.

Politicians from across the area met today to discuss whether the final draft of Flintshire Council’s Local Development Plan (LDP) should be approved to go out to public consultation.

It was backed by the majority of councillors during a debate held at County Hall in Mold, despite some questioning whether Flintshire had the right facilities to support thousands of new residents.

It came as the deputy leader of the Flintshire Independents Group highlighted the difficulty existing householders are facing in accessing GP services.

Cllr Carol Ellis, who represents part of Buckley, said: “My concern is over the GP provision and I know the chief executive touched on it, but it is serious.

“A neighbour of mine has waited four weeks after being in hospital to get a GP appointment and he’s a pretty sick man who’s aged 78.

“We’re a large area in Flintshire and we all know we haven’t got a district hospital; we’re dependent on Wrexham or Glan Clwyd.

“Whilst I will support the plan, I really do think that on behalf of the people I represent and knowing the problems that they’re encountering currently, I would like that to be on record.”

Officers said the two main housing sites would be the Northern Gateway development in Deeside, where 1,300 homes have been earmarked, along with 300 more at Warren Hall in Broughton.

Consultations have been held with representatives from the region’s health board as part of the LDP process so it can prepare for the demand created by the extra houses.

However, Cllr Richard Jones cast doubt on whether Betsi Cadwaladr University Health Board could rise to the challenge.

He said: “I’m sure the rest of the planning strategy group would agree that I wasn’t necessary convinced or overwhelmed by their response.

“They didn’t give me any confidence that they really understand how the LDP and development of residential properties will affect the health board.

“When you get these developments, the first thing our residents will ask is where the infrastructure is to support it.

“If they don’t think there’s enough doctors, dentists and other health basics then they’ll come to us and ask why we’ve agreed to that particular development.”

Chief executive Colin Everett said discussions had been held around how to improve infrastructure, including schools and health services.

He added that further dialogue would be held with the health board to ensure appropriate facilities are put in place.
Most councillors in the room supported putting the LDP out to consultation.

It came as Cllr Chris Bithell, a member of the ruling Labour administration, insisted they should put the interests of future homeowners first.

The authority’s cabinet member for planning and public protection, said: “There is a seriousness in all of this, and people have to have somewhere to live.

“I think we need to bear in mind that we wouldn’t be living where we are now ourselves if planners and councillors hadn’t given planning permission for the areas we live in.

Council leader Ian Roberts also stressed the need for a plan to be in place.

He said it would prevent speculative developments by property developers.

The Flint Castle councillor said: “I am quite sure that most members in the chamber will have issues relating to some aspect of this plan…but today is not about those concerns.

“In many ways, this plan provides security for all of us across the chamber because we are all vulnerable to speculative developments.

“If part of this plan or the entirety of the plan fails, then we will have numerous speculative developments coming up because we do not have the security of this plan in place.”

At the end of the debate, 46 councillors voted in favour of putting the LDP out for consultation with four abstentions.

People living in the county will be given the opportunity to make their views known from the end of September.