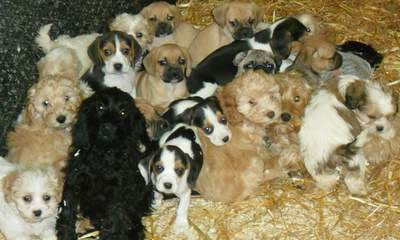 Latest from Cardiff Bay via our regular partnership with SeneddHome.com.

There’s a consultation on introducing a law which will ban third-party puppy and kitten sales in Wales (aka. Lucy’s Law). Given this is now a matter of urgency, when would firm proposals be brought forward?

Environment & Rural Affairs Minister, Lesley Griffiths (Lab, Wrexham), expressed her horror at the documentary. The Chief Veterinary Officer (CVO) has asked all 22 local authorities to visit offending puppy farms to ensure licence requirements were being upheld. The introduction of Lucy’s Law itself could be accelerated to spring 2020:

“I didn’t want to get any unintended consequences from that, but, again, I’ve asked the CVO to look at when we can bring that in much quicker than we’d anticipated due to all the other ongoing work we’ve got, particularly in relation to Brexit. I am aware that the CVO’s office is particularly stretched. So, in relation to a timeline for Lucy’s Law, I think I will have to write to the Member, but I would hope certainly by the spring.”
– Environment & Rural Affairs Minister, Lesley Griffiths

No “transformational change” for farm funding?

Llyr Gruffydd AM (Plaid, North Wales) called back to changes to farm funding – moving money from direct farm payments (Pillar 1) towards rural development (Pillar 2) – which were, at the time, promised as being a transformational change.

“….farmers were, of course, told, at the time, that the money taken out from their direct payments would actually come back to them through the rural development programme. The reality, of course, is very different, because we’ve seen how the programme budget reduced significantly in 2016, from £956 million as a result of amending the rate of domestic core financing provided by the Welsh Government to what is now a total budget of £828 million for the programme period, of course, which ends next year.”
– Llyr Gruffydd AM

The Minister admitted that the Welsh Government “hasn’t seen the change that we would want in some areas” but the money needs to be maximised as much as possible. Given the uncertainties of Brexit and proposals for post-Brexit programmes, it wasn’t a good time for a review.

Delyth Jewell AM (Plaid, South Wales East) highlighted Ineos’ interest in fracking. While the news of investment in a new vehicle plant in Bridgend was welcome, would this affect the Welsh Government’s presumption against fracking licences given a recent application for seismic testing in Cardigan Bay?

“This Government has consistently made clear our opposition to fracking, as set out in our programme for government. Following overwhelming public support for the consultation proposals, I made a policy statement last December, setting out fracking will not be supported in Wales and there should be no new petroleum licensing.”
– Environment & Rural Affairs Minister, Lesley Griffiths

The Minister said that she’s made representation to the UK Government on seismic drilling (a precursor to fracking), though David Rees AM (Lab, Aberavon) added that any form of deep borehole application needed to be reconsidered as constituents often see it as the first step towards fracking.

Mohammad Asghar AM (Con, South Wales East), by contrast, spoke in support of fracking, saying it contributed to two-thirds of American carbon emission reductions – which the Minister dismissed; she saw no future for a new fossil fuel industry.

DEESIDE.com
@DeesideDotCom
@vonschmytt 45,600ft hmmm those clouds!
View all of our recent tweets by clicking here...!