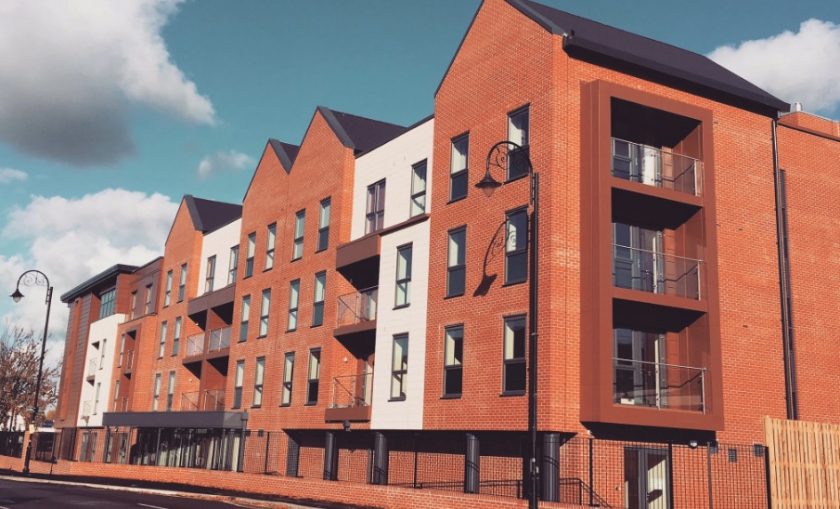 The 10-million-pound development, a key element of the regeneration work in Flint town centre, is owned by ClwydAlyn housing association and managed in partnership with Flintshire County Council.

Ms Blythyn enjoyed a tour of LLys Raddington which features 73 self-contained one and two-bedroom apartments, a restaurant and a sky lounge rooftop conservatory room overlooking the town, as well as a guest bedroom and additional assisted bathing rooms.

Residents are supported by a team of 24-hour, on-site care professionals, with the added benefit of supporting people living with dementia.

The development, which also boasts balconies and a stunning garden, was funded by ClwydAlyn, together with invaluable grant support from the Welsh Government, secured in partnership with Flintshire County Council.

Work began on the development, designed by John McCall Architects and built by Anwyl Construction, in 2016, with the first residents moving in in November 2018.

Residents describe feeling part of a community whilst having their own privacy and independence. “I like the feeling of security here and having help on hand when needed,’’ said Jacqueline Jones, who moved into Llys Raddington on the day the scheme opened. 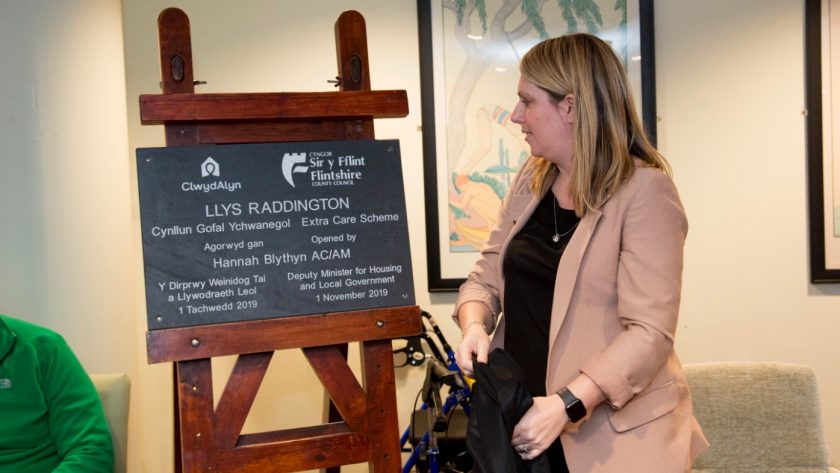 “The location is excellent as it’s really handy to pop into town. I’m local to Flint and continuing to be part of the community is really important to me.’’

“The redevelopment and regeneration of Flint has been a fantastic opportunity to improve our town centre and this state-of-the-art extra care scheme is the icing on the cake.  It is excellent and all the residents I have spoken to are very happy here.  Thanks go everyone involved.”

Stephen Porter, Chair of ClwydAlyn, who also welcomed Hannah Blythyn to the development, said: “The scheme has always been an integral part of the transformation of Flint. It is the perfect location for this specialist housing option for older people, allowing them to live independently with access to all the town centre facilities on their doorstep, with the peace of mind of professional support provided by the local authority.

“The fact that this terrific facility was made possible by highly effective partnership working makes it all the more impressive.

“As well as providing a great place for our residents to live, the development has also provided a boost to the surrounding area, creating jobs and encouraging engagement with local schools, arts organisations and local businesses.’’

Clare Budden, Chief Executive of ClwydAlyn, said: “We are extremely proud of the LLys Raddington Extra Care housing scheme and it has been a privilege to see the difference the initiative has made to the health and wellbeing of our residents and their families.

“The self-contained apartments allow tenants to be as private or as sociable as they wish so that they can live with dignity and independence while accessing the individual support they need.’’

Ms Blythyn said: “It has been a pleasure to officially open Llys Raddington, which allows residents to retain independence while providing them with a 24-hour team of professionals.  It’s a fantastic facility made possible by the Welsh Government’s Social Housing Grant and shows how we are delivering on our commitment to provide 20,000 affordable homes.”