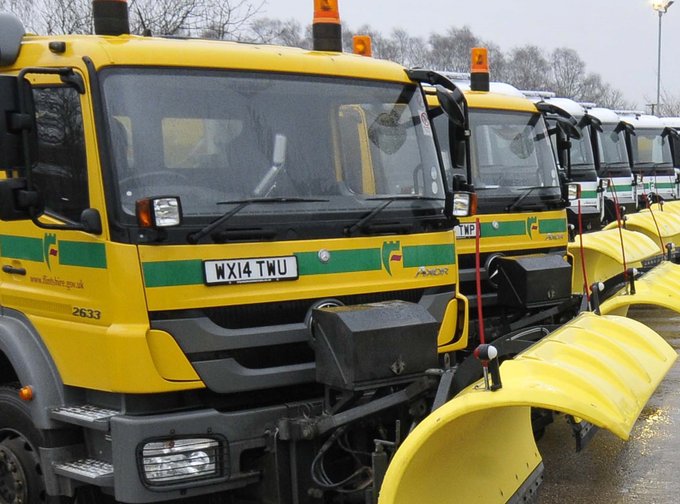 You may spot gritters on the roads of Flintshire this week, but don’t worry, there is no snow forecast.

Flintshire County Council fleet of gritters will be carrying out a dry-runs this week to train drivers in preparation for the colder weather.

You may see a number of Gritters out on the roads this week.

Don’t worry we’ve not had any forecasts for ice or snow.

Our drivers are in training – preparing for the winter ahead. pic.twitter.com/h5XTKOHs8v

Plans on how Flintshire Council aims to keep the wheels turning on road network in the event of severe weather conditions this winter were revealed last month.

The council has been carrying out a review of how it responds to issues caused by snow and ice, as well as other adverse weather such as flooding and high winds.

Six duty officers will be on hand throughout the winter season to monitor forecasts and decide on any necessary action.

A minimum of 26 frontline staff will be also be on-call throughout the period to respond to any problems.

The issuing of a severe weather warning would lead to a special control room being set up in Alltami run by staff from the authority’s Streetscene department, who will have the ability to mobilise gritters.

A senior officer said communication methods used during wintry spells were one of the main issues which had been placed under the spotlight as part of the review.

In a report, Steve Jones, chief officer for Streetscene and transportation, said: “The winter maintenance service is recognised as one of the most important functions that the council provides.

“It is fundamental to providing safe and reliable access to the highway network during the period October to April each year.

“It is good practise to regularly review the winter maintenance policy and this report outlines the changes to the most recent version which is being put forward for cabinet approval.

“There are no significant changes following the review of the policy on this occasion, however in recent years the service has looked to improve the communication during periods of severe or prolonged adverse weather, and the approach has been captured within the policy.”

The recent relocation of hundreds of staff from the council’s main HQ in Mold to a new base in Ewloe has resulted in a joint contact centre being set up for its Streetscene and housing departments.

According to the report, Streetscene staff have met regularly with the manager of the new centre to ensure a smooth transition, particularly in the event of bad weather.