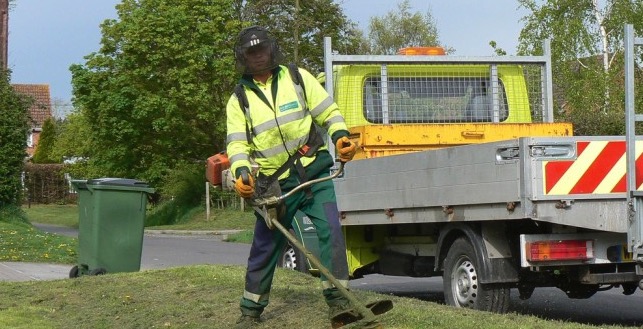 Green spaces in Flintshire could receive an extra cut during the winter as milder temperatures are said to be causing problems for council grass cutters.

The potential move has been revealed as the local authority said warmer than average weather during traditionally colder months was creating longer grass.

It meant the local authority had to bring in external help this year and mowing continued right up until the end of last month as it struggled to keep pace.

Officials are now considering giving some areas a single cut during the winter in a bid to tackle the issue.

In a report set to go before councillors next week, a senior officer said the delays were added to when workers were diverted to deal with flooding incidents in June.

Steve Jones, the council’s chief officer for Streetscene and transportation, said: “Recent milder winters have had an impact on the service as grass continues to grow, even during the winter period.

“This results in longer grass for the first cut of the year which slows down the grass cutting operation and requires cuttings to be removed in some locations.

“If resources allow the service intends to undertake a single winter cut, if these circumstances are experienced in future.

“During early June 2019, heavy rain interrupted grass cutting services whilst resources were redirected to respond to localised flooding incidents, and were not able to restart the grass cutting rounds whilst the ground remained too wet for the machinery to operate.”

Mr Jones said the situation was made worse by record breaking temperatures in July.

It meant the council had to bring in staff from a private company to help its own workers catch up.

The authority is currently carrying out a review of its grass cutting policy and is also asking town and community councils to suggest areas where wildflowers could be planted.

It is hope the moved will reduce the reliance on grass cutting where appropriate and also aid biodiversity.

Mr Jones added: “Encouraging communities to manage verges and other areas such as smaller roundabouts and amenity areas for wildflower planting and care, can improve the aesthetics of the area and reduce the burden on the grass cutting service.

“This can only be considered where it is safe to do so, and not in conflict with health and safety management of verges.

“Roadside verges and other areas can also be sanctuaries for wildflowers, pollinating insects, reptiles, amphibians and small mammals.

“These are seen as essential green corridors for which these species disperse.”

The proposals will be considered by members of the council’s environment scrutiny committee at a meeting on Tuesday.