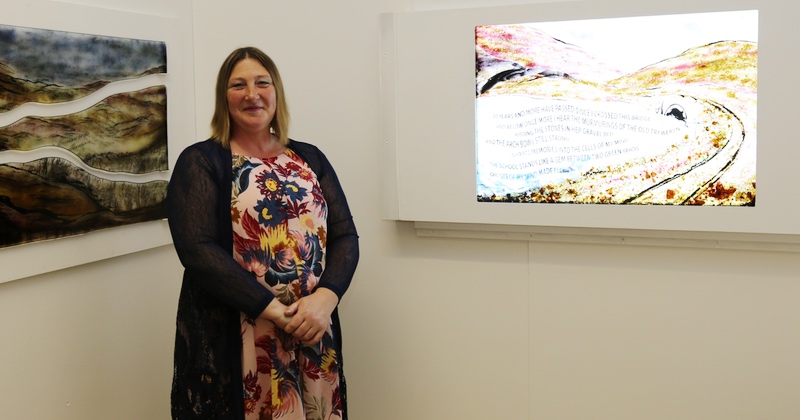 A university graduate has told how her time at the university changed her life and put her on the road to success as an artist.

Heulwen Wright, 46, from Llangollen, is set to showcase her glass and copper depiction of an old Welsh Bible in a competition at National Eisteddfod in Llanrwst this summer after graduating with a first class Master of Design (MDes) in Applied Arts from Wrexham Glyndŵr University.

The project was inspired by Heulwen’s research into Y Beibl Bach at Chirk Castle while she was preparing for an exhibition at the historic venue during her second year of a BA Applied Arts degree.

Heulwen said she was fascinated by how Sir Thomas Mydleton contributed to the first translation of the Bible into Welsh – and how this played a part in its survival by making it possible for people to afford to have the written word in their homes for the first time.

Heulwen, who is originally from Bala and was born in a tiny cottage by the reservoir at Capel Celyn, reflects the area’s rich history and her love of Welsh culture in her work.

“This piece instils a sense of mystery and sentimentality and has a ghostly feel to it,” she said.

The mixed media piece is designed with hidden meaning, with pages fashioned from delicate screen printed glass and ‘aged’ by brushing and sponging silver stain before firing them in a kiln.

The cover has been acid-etched to create detail and texture in the signatures before being aged using a technique known as patternation.

“The subtle signatures symbolise the passing of time and hint at the fragility of life, yet the strength of our history and connection to times past,” Heulwen added.

Her Bible artwork will be on display in an exhibition at Y Lle Celf during the National Eisteddfod of Wales, the annual celebration of the Welsh language and culture, which will be held from August 3-10.

She said: “It’s exciting and a really honour really. It’s a very big and prestigious competition and the work by the other competitors is amazing.”

Heulwen’s current collection was recently on display and available to purchase at Wrexham Glyndŵr University School of Creative Arts Graduate Summer Show and at London’s New Designers at the Business Design Centre, Islington.

Heulwen, who works part-time as a hotel receptionist, was inspired to come to Glyndŵr by her children Jake and Olivia’s progress in secondary school – initially on a BA Applied Arts.

She added that she could not have embarked on her artistic endeavours, including the exhibiting at the Eisteddfod, without the Glyndŵr course and praised staff for their “fantastic” teaching.

“Coming to university changed my life and these four years have been a real journey,” she said.

“It’s given me confidence and the course has modules that other universities don’t teach in that way, so it really helps to think about how to set up your own business and how to go out into the big wide world on your own.

“We’re very lucky here – the teaching that I’ve had has been second to none really.”

More information about the range of art and design courses at Wrexham Glyndŵr University can be found here.