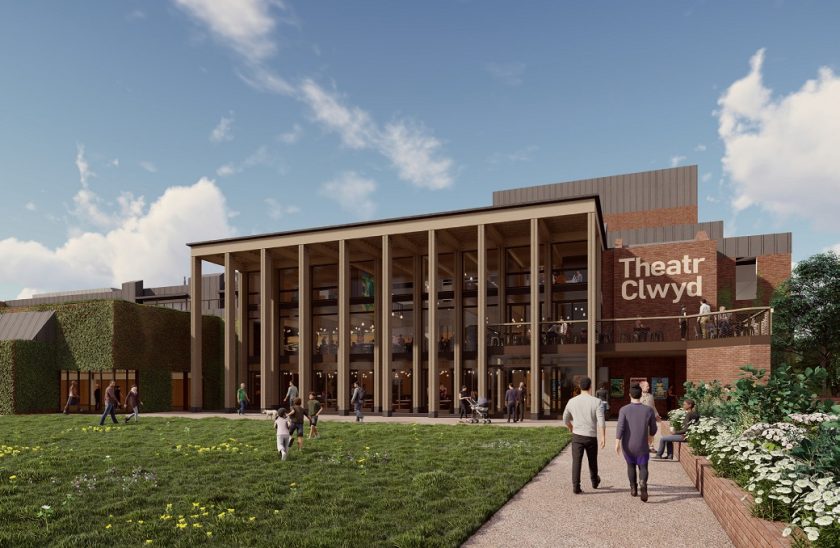 The future of the £35m renovation of Theatr Clwyd lies in the hands of the Welsh Government, according to a senior council figure.

It follows planning permission being granted to transform the Grade II-listed 1970s complex in Mold last week in a bid to address its deteriorating condition.

A leaking roof and poor disabled access are among the problems flagged up by Flintshire Council, which has previously warned that productions could be halted unless improvements are delivered.

The refurbishment will create a large extension to the front of the theatre, including a new three-storey foyer with a restaurant, bar and cafe.

However, it is dependent on an application for £25m worth of capital funding from the Welsh Government to go ahead.

Speaking to the Local Democracy Reporting Service, the council’s chief executive said he was hopeful the scheme would be financed, despite government officials currently focusing on the response to the coronavirus.

Colin Everett said: “The Welsh Government have not been making new capital decisions over the last month or two.

“For understandable reasons, they’ve been distracted and probably taking stock of their future capital availability.

“Our capital application for £25m remains with them. It is still a live discussion and we’ve made progress in building the scheme behind the scenes with the architects and planning permission.
“As far as we’re concerned, we still want to conclude the project.”

Theatr Clwyd was built in 1976 by Clwyd County Council to provide the region with theatre and arts productions.

The local authority, the Arts Council of Wales and individual supporters have already spent more than £1m developing the modernisation plans, with a further £5m earmarked as part of Flintshire’s capital budget.

The Welsh Government previously told all parties involved that the costs would have to be closely examined before being approved.

Writing to the council in 2018, head of arts policy Peter Owen said: “A capital redevelopment of this scale is a very significant undertaking. It is essential that decisions for potential government funding are based on rigorous feasibility studies.

“Therefore, we would encourage Flintshire County Council, working closely with Arts Council of Wales to progress to the next stage of the project beyond feasibility and into design and development detail study.

“We would still encourage the theatre and the council to critically examine the cost base of the project through options and choices on value engineering, and to creatively explore the options for commercialisation and supported borrowing.”

Meanwhile, the theatre has been closed since March due to the coronavirus lockdown, which officials estimated had cost the venue £2m in a “best case scenario”.