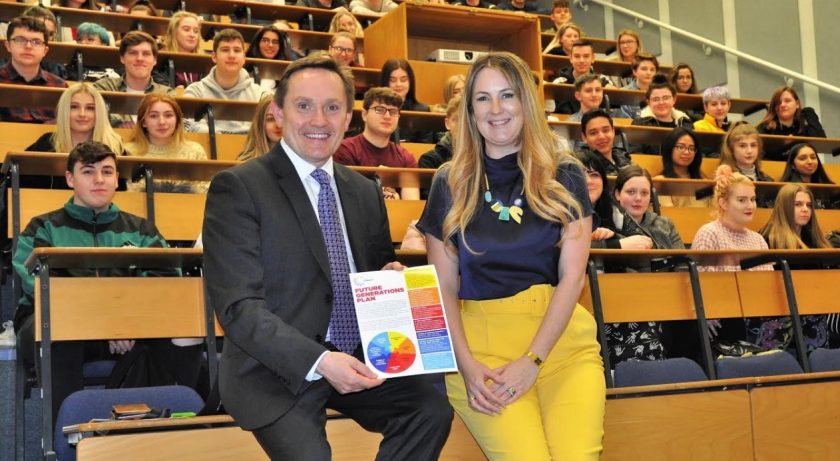 The Future Generations Commissioner for Wales paid tribute to Coleg Cambria for its commitment to improving the lives of staff and students.

Cambria has been lauded by politicians and the public, including Alyn and Deeside AM Jack Sargeant, for its Future Generation Plan and progress made following the Welsh Government’s Wellbeing of Future Generations Act (Wales) 2015.

At the heart of the plan are the seven wellbeing goals that make up the Act, which was itself designed to improve the economic, social, environmental and cultural wellbeing of Wales through sustainable development.

Ms Howe says there is an increasing interest in the role of her office and the Act itself, which places a legal duty on the public sector to ensure the needs of the present are met without compromising the ability of future generations to do the same.

“This is not an easy journey, and that is why we view it more of an expedition,” said the Commissioner.

We also realise that different organisations are at different stages in their views and practices around sustainable development and social responsibility in Wales.

There are some real champions and there are also many who haven’t yet considered the part they could play. And the difference it could make to Wales.”

Mr Sargeant added: “There are lots of organisations across Wales doing some fantastic work, including Coleg Cambria in my own constituency.

They have created their own future generations plan even though they don’t have to. I think they clearly recognise the importance of the Act and the opportunities it presents.”

Mr Jones thanked the Commissioner for attending the college and meeting with students and staff, who are united in their support of the Plan and its values.

“Coleg Cambria’s Future Generation Plan brings together excellent current and previous practice to provide a strong foundation on which to grow and diversify our work to support future generations,” he said.

While the Act is not specifically aimed at the education sector, the role we play in the community and the size of the institution impact upon many thousands of people across the region and beyond.”

Mr Jones added: “I would like to thank the Commissioner for spending time with the team and our students and assure her we will continue to develop and take pride in being recognised as a standard bearer for the Act and what it stands for.”