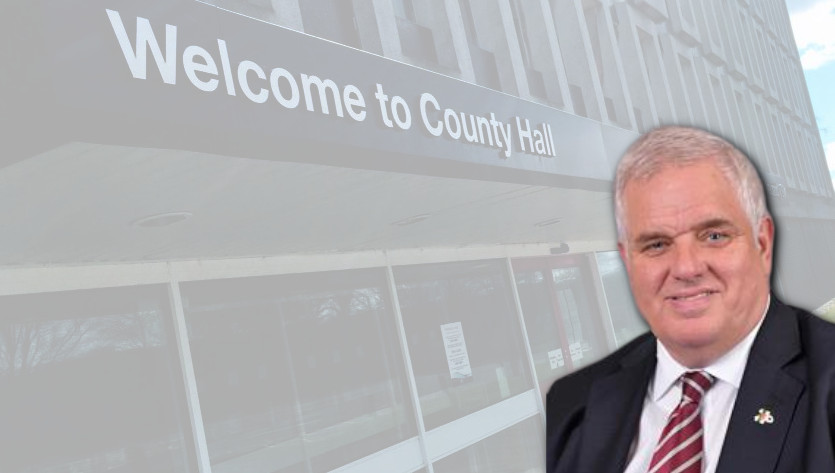 A Flintshire politician has opened up about how his battle with depression saw his career as a police officer cut short.

Cllr Kevin Hughes, who represents Gwernymynydd, gave a moving account of his 20-year struggle with mental health issues in front of a full council meeting in Mold on Wednesday.

During his speech, he revealed how he was advised to leave his old career because of the condition based on the conclusions of the force medical examiner.

The comments were made as Cllr Hughes joined colleagues in showing support for a campaign aimed at reducing the number of deaths caused by suicide among men in Wales.

A motion put forward ahead of the meeting saw council leader Ian Roberts ask all 70 councillors to back the #IPledge2Talk initiative launched by Labour AM Eluned Morgan earlier this year.

The scheme is designed to encourage more people to discuss their feelings and Cllr Hughes said it was sharing his problems with another councillor that helped him open up.

He also said he did not blame police managers for having to abandon his job after struggling to deal with some of the things he witnessed in the role.

He said: “I saw things and dealt with situations that perhaps I as a person was ill-equipped to deal with.

“I know I got into bed at night often too afraid to sleep knowing that the nightmares were sure to come.

“Having retired from the police I continued having problems and for the last 20 years or so my GP and other NHS services have helped me, and I’ve continued taking medication throughout that time.

“I never got to the stage where I contemplated suicide, perhaps because professionally I dealt with so many and I knew the devastating effects it had on loved ones and families.

“One thing that really stuck with me though was a couple of short conversations here in County Hall with a fellow councillor who like me had suffered with depression for years.

“Just talking with someone who knew what it was like to have those feelings of worthlessness and the lack of confidence and self-belief really helped me.”

Cllr Hughes added that the same councillor, who he did not name, approached him before the meeting to check how he was.

The #IPledge2Talk campaign received the backing of all groups in Flintshire after Labour leader Cllr Roberts said it was important for the authority to set an example.

Speaking at the start of the meeting, he said the motion had received the backing of Deeside AM Jack Sargeant, who succeeded his father Carl following his death in November 2017.

In July this year, a coroner ruled the 49-year-old’s passing at his Connah’s Quay home just four days after he lost his cabinet role was caused by suicide, and criticised the lack of support available for ministers in his position.

Cllr Roberts said the loss of a family member could lead to a ‘lifetime of sadness’ and set out plans for work to promote positive mental health to be rolled out across the county.

He said: “It is difficult for many of us to imagine the pain, despair and regret of those families who have experienced the death of a family member through suicide and I am aware there are numbers of members sat in this chamber today to whom this applies.

“However, it’s even more difficult to imagine the mental anguish, pain and despair of those who see suicide as the only course of action for them.

“In bringing this forward I was very aware of the events that have taken place recently in this county and I spoke to Jack Sargeant on behalf of the Sargeant family.

“I got a very positive confirmation from Jack and can confirm that Jack, Bernie and Lucy fully support this motion brought forward today.”