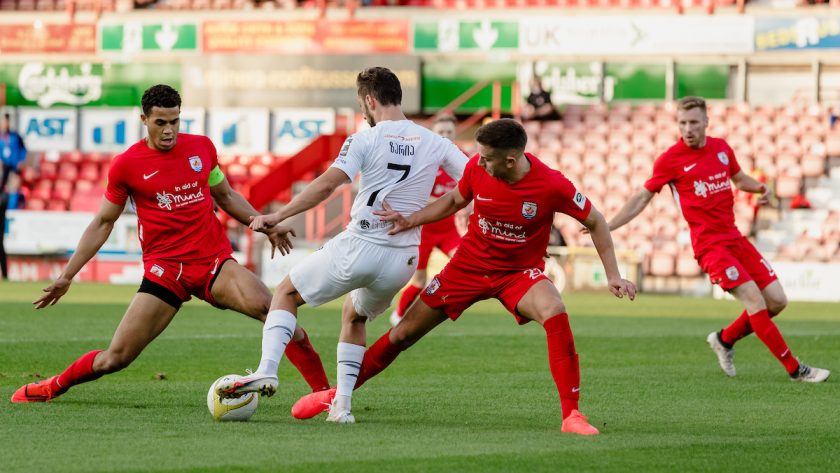 The Football Association of Wales (FAW) is “satisfied” all COVID-19 protocols were followed by Connah’s Quay Nomads in order for the match against Dinamo Tbilisi to go ahead in Wrexham on Wednesday night.

They are however investigating whether comments made after the match by manager Andy Morrison “constitute a breach of FAW Rules.”

Following the Europa League qualifier – which Nomads lost 1-0 after conceding a 97th-minute penalty – Morrison said they “had to turn a blind eye” to players who turned up feeling unwell.

In an interview with media outlets on video after the game, Morrison said: “Three lads have turned up tonight and they’re not well.

Nomads have said Morrison’s comments have been “misconstrued by many” to mean the club ignored COVID-19 regulations.

FAW has issued a statement, they have said: “Football Association of Wales is satisfied that all COVID-19 protocols were followed in order for the game to go ahead.”

“The club’s doctor followed the national guidance and informed the relevant health authorities where the players reside to allow track and trace procedures to be implemented.

The FAW is further satisfied that the club followed the advice of Public Health Wales and the UEFA protocols in order for the match to go ahead as scheduled once the positive tests had been confirmed.”

Following media comments made by Nomads manager, Andy Morrison, the FAW “immediately requested the observations of the club.”

“The FAW is satisfied that the comments contradict the confirmed compliance with the COVID-19 protocols; and whilst the club may decide to take internal actions, the FAW is currently investigating whether a breach of the guidelines has taken place and whether the comments constitute a breach of FAW Rules for bringing the association into disrepute.”

North Wales Police has said they were “aware of the public concern” and was “working closely” with partners in the local authority, the Football Association of Wales and Public Health Wales to ensure the matter in fully investigated and appropriate action is taken to maintain and secure public safety.

UEFA told Deeside.com: “We have no specific comment to make and refer you to the UEFA Return to Play Protocol.”