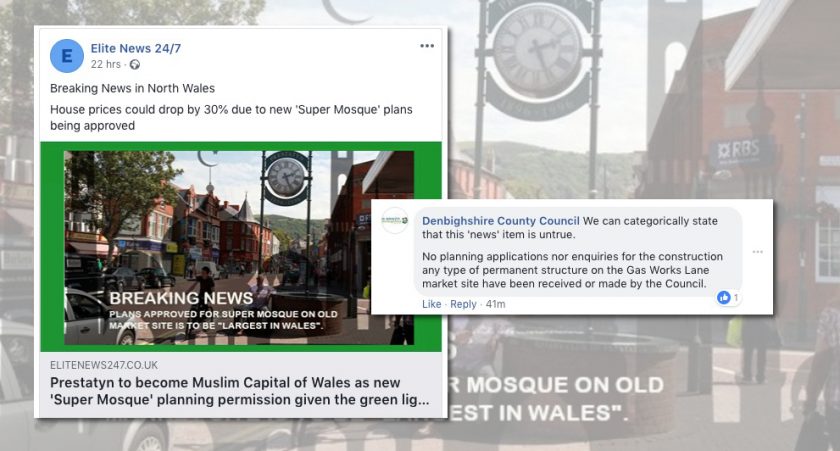 A website  suggesting a ‘super-mosque’ is to be built in Prestatyn has been slammed for peddling ‘fake news’ and condemned by community leaders.

An article on Elitenews247.co.uk claims that the town is to be turned into the ‘Muslim capital of Wales’ through the building of a large mosque on Gas Works Lane.

The ‘story’ also includes what are made to look like architectural drawings of the building, and an artist’s impression.

But that image has been taken from a genuine news story about a planned development in Abu Dhabi.

Local councillors confirmed there are no such plans and said they had called the police.

Prestatyn North Cllr Paul Penlington, said: “I am very concerned at this online fake story, it is absolutely false but appears designed to stir up racial hatred in our community.

“Some people may claim it is satire but the fact is it singles out one religious group as something others should fear, that is not satire that is thinly disguised racism.

“When it becomes acceptable to joke about, or fear, people for no intelligent reason but simply because of their religion or ethnicity you are on a very slippery slope.

“Prestatyn is a welcoming community and I was very pleased to see many people challenged this, sadly many did not. I have passed details of the site on to North Wales Police.”

Fiyaz Mugha from Tell MAMA, a group dedicated to countering anti-Islamic hate and Islamophobia, said: “Super mosque stories have been used before to stir up tensions and to cause divisions in society.

“We have seen this ruse used before when extremist groups or individuals with an axe to grind against Muslim communities have stoked up fake news and put it onto the internet, or when they have circulated leaflets in the area.

“The key to this is to check and double check and not casually accept what is pushed online or through sources that are not corroborated.

“Such stories and the individuals who push them do a dis-service to our communities and our country.”