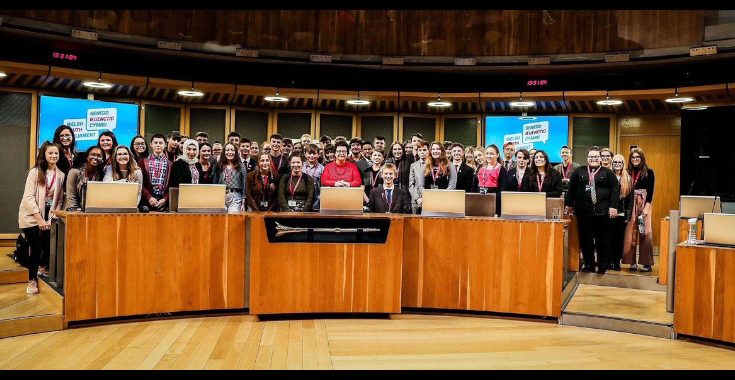 On October 25th 2019, the Welsh Youth Parliament held its second plenary session at the Senedd.

The session was dominated by their recent report (link), which made the case for key life skills to be included in the new national curriculum, but MWYPs were also updated on work regarding their other two chosen priorities: mental health and plastic waste.

Gwion Rhisiart (Cardiff Central) said the report’s findings highlighted inconsistencies. 85% of young people had lessons on internet safety before the age of 18, but just 12% had lessons on dealing with grief, 11% sign language and 10% political education. Lloyd Mann (Monmouth) added that 48% received life skills lessons once a year or less.

Betsan Roberts (Cardiff North) said there was support for a mix of life skills teaching being provided by form teachers, subject specialists and external experts – but only 25% of people received lessons from external experts. Rhys Lewis (Preseli Pembs.) added that one constant theme was a need to ensure a balance between life skills and preparing people to pass exams.

Education Minister, Kirsty Williams (Lib Dem, Brecon & Radnor), was “absolutely clear” that there was a need to do more to support teachers to deliver life skills successfully. Investment in teacher training is a priority and she saw opportunities to do more with the online Hwb platform. 400 young people took part in feedback on the draft new curriculum and raised challenging questions for the government.

Then the session moved to questions.

Johnathon Dawes (Clwyd West) asked how consistency will be guaranteed? The Minister told him that the new curriculum shouldn’t be seen as a free for all; there’ll be a common set of expectations on what should be covered. However, she cautioned against overcrowding the curriculum as there are long lists of things people expect to be taught, but including all of them leaves less space for topics like life skills.

Tommy Church (Merthyr & Rhymney) said that 44% of teachers weren’t confident in their ability to teach life skills; how could the government ensure teachers were comfortable? The Minister didn’t directly respond to that but said that secondary school teachers were often experts in a single subject, but it would be jarring for them to all of a sudden be asked to adapt to something different.

In response to Ellie Murphy (Partner Member), the Minister made it clear that exams would continue to be important but wouldn’t be the be-all and end-all.

Replying to a separate question from Ruth Sibayan (Swansea East), the Minister didn’t want life skills to be taught during convenient time slots for teachers; it needs to be embedded across the curriculum. She gave an example of teaching about tax which covers maths, financial literacy and political education.

Updating the Youth Parliament on their mental health committee’s work, Talulah Thomas (Clwyd South), said several issues have arisen and will be explored further. These include raising awareness (of mental health), training for those working with young people and the impact of social media. She added that the situation was getting worse, with more children than ever before on treatment waiting lists.

Hasna Ali (Partner Member) – a refugee from Syria – raised the matter of specific mental health issues relating to refugees and asylum seekers, including post-traumatic stress disorder and depression. UNICEF puts a strong emphasis on education; she had to learn a new language after moving to Wales, but education has helped her adapt to a new life.

There was a more activist-focused theme on plastic waste with many MWYPs outlining what they’ve done in their schools and local communities to either clean up waste or reduce it.