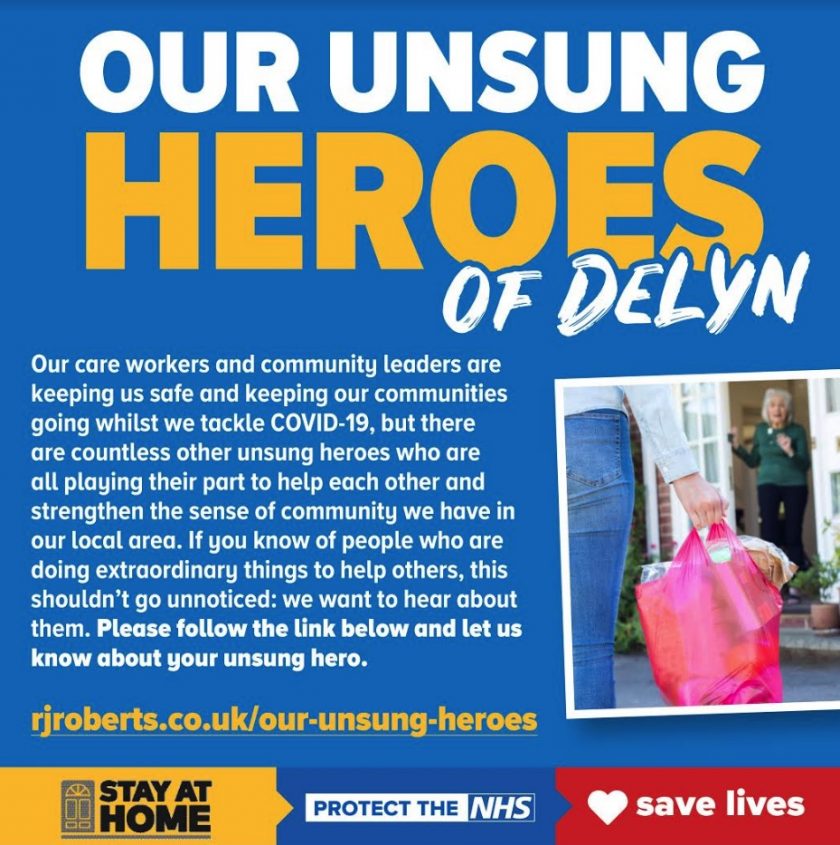 MP Rob Roberts has launched an ‘Unsung Heroes of Delyn’ campaign to recognise those individuals and organisations who have gone above and beyond the call of duty in our community.

Many people have contacted the Delyn MP’s office to tell him about the extra-ordinary efforts being made by others in his constituency.

Individuals and organisations can now be nominated to receive recognition for the efforts.

Those nominated will receive a certificate of recognition and will be publicly recognised by Rob.

Once lockdown is over, the country has healed, and life returns to a more recognisable form of normality Rob will host a celebratory event, and those who were nominated will all be invited.

“It’s difficult times, and we all appreciate how challenging these times can be. Now more than ever, it is important that our community comes together to support one another in whatever way we can.

“The people in Delyn have been community driven and I’ve heard lots of stories from people about the various activities that have been taking place.

I thought it important to be a part of that, to recognise the hard work some people, so I am proud to launch my ‘Unsung Heroes of Delyn’ campaign which will thank and celebrate the amazing contributions from local people, organisations, and companies.

“Each week I will publicly recognise and thank our local heroes for their work and efforts in responding to the current crisis and when it’s over I will be inviting them to a celebratory event to thank them face to face for their brilliant work.”

To nominate an individual, business, or organisation that you think has gone above and beyond the call of duty recently please use the nomination form on Rob’s website at wwww.rjroberts.co.uk/our-unsung-heroes or email Rob at rob.roberts.mp@parliament.uk.