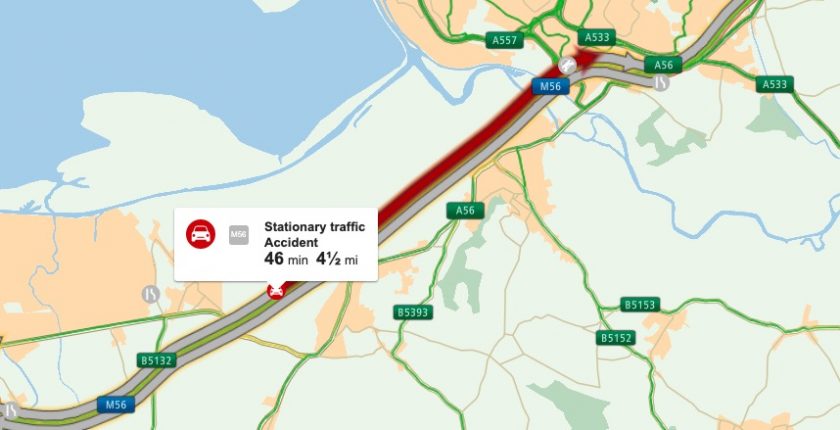 Update: The M56 in Cheshire is currently experiencing severe delays of at least 60 minutes above usual journey times.

“At approximately 11 am there was a multiple vehicle collision on the eastbound carriageway which blocked lanes 2 and 3 (of 3) which are now closed within J12 (Runcorn) and the queue of traffic (approximately 5 miles) is back to J14 (Ellesmere Port).

For traffic approaching the delays locally, you are advised to expect disruption with extra journey time and you may wish to re-route or delay your journey.

If travelling towards this area from much farther afield, delay information will remain visible on our on-road variable message signs until delays have cleared.”

Previous report: Two lanes of the M56 are closed eastbound at J12 A557 (Runcorn) following a collision.

Traffic is reported to be at a standstill behind the collision which is causing over four miles of tailbacks from Helsby.

Emergency services including fire and ambulance are at the scene.

#M56 westbound at #J12 (#Frodsham #Runcorn #Widness) currently has 2 lanes closed due to a collision. @NWAmbulance & @CheshireFire are en-route. Traffic Officers & @CheshireRCU @NWmwaypolice are on scene.

Two lanes closed and long delays due to accident, two cars involved on M56 Eastbound at J12 A557 (Runcorn).

Travel time is around 55 minute.

RSPB Burton Mere Wetlands
@RSPB_BurtonMere
What a gorgeous winter day! It looks like more of the same weather for our Get Ready for the #BigGardenBirdWatch family #event tomorrow afternoon. Drop in any time from 1-3pm to make your own birdcake feeder to take home. Details here: link (Pic: Paul Jubb) PIC:

Flintshire Marie Curie Fundraising group
@NickiKenealy2
The @mariecurieuk Great Daffodil Appeal of 2020 is launching soon here in #Flintshire If you would like any Daffodul boxes to display in your #business premises please reply to this tweet and we will deliver them to you. Thank you @IANGIBBONS3 @DeesideDotCom @FLVCFlintshire PIC:

DEESIDE.com
@DeesideDotCom
Looks like a Tesco Express is set to open in Connah’s Quay link
View all of our recent tweets by clicking here...!