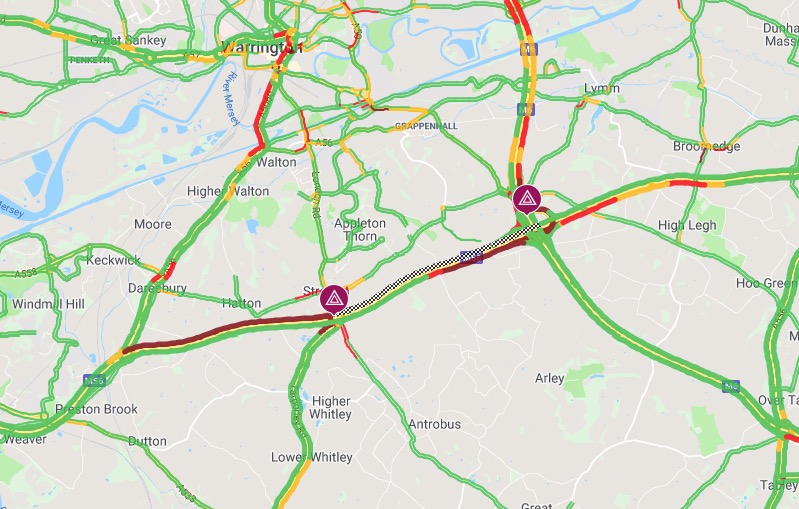 Traffic on a stretch of the M56 in Cheshire has been stopped following a serious collision.

“The M56 is closed eastbound between Junction 10 (Warrington) and Junction 9 (M6 J20) due to a serious multi-vehicle collision.

Take the 1st exit from the roundabout onto the A49 (Tarporley Road).

Allow at least an extra 60 minutes for your journey.”

The collision took place on the eastbound carriageway between from J10 for Stretton and J9 M6 the Lymm Interchange.

Emergency services including paramedics and the fire service are at the scene.

All lanes on both east and westbound carriageways were stopped while two air ambulances lands at the scene.

The westbound side has reopened but there is heavy traffic reported.

Eastbound: “All lanes stopped and stationary traffic due to accident on M56 Eastbound from J10 A49 Tarporley Road (Stretton) to J9 M6 J20 (Lymm Interchange). Traffic has been held since around 17:45.

Congestion to J11 (Preston Brook). The road has been closed since around 17:55, traffic had been previously held in both directions to allow two air ambulances on the scene before the closure was fully implemented.

All traffic being temporarily held and stationary traffic due to accidents in the opposite direction on M56 Westbound from J9 M6 J20 (Lymm Interchange) to J10 A49 Tarporley Road (Stretton). Traffic has been held since around 17:45.”