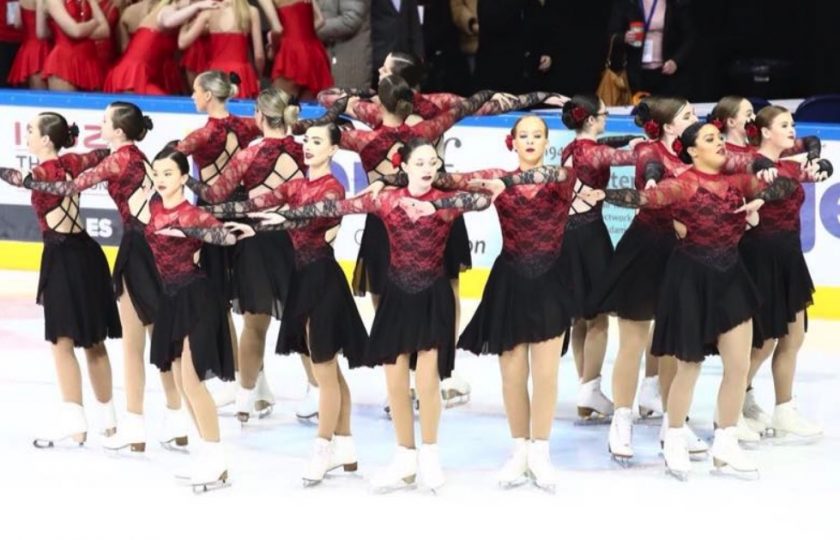 Flintshire skaters were flying the flag for Wales at last weeks inaugural Britannia Cup which took place in Nottingham.

The competition was being held for the first time as part of the British Synchronised Skating Championships.

Deeside Synchronised Ice Skating Club had four teams at Nottingham’s Ice Arena for the event which was broadcast live on BBC iPlayer.

The Deelites led the way winning Gold to become the British champions, they blew away the competition to lead the field with a mesmerising, fast paced tango routine.

The win has crowned a momentous twelve months for the Deelites becoming Welsh and British Champions in the same year, in only their first season at intermediate level.

The Angels – competing in the juvenile category –  secured a hard-fought fourth place just narrowly missing out on bronze with an energetic, catchy and lively performance.

In their first ever competitive performance, the Cherubs – beginners category – glided across the ice with a memorable and perfectly timed performance.

The youngsters secured fourth place just missing a podium position by less than a point, their performance received widespread praise and glowing reviews.

Adult category entrants the Halos enjoyed their first competitive outing with an impressive start to the season, they were placed 11th out of 15 with a steady and well balance routine.

All four teams will be competing at the Scottish International Trophy D’Ecosse in Dumfries early in February with high hopes of bringing more medals back to Deeside.

Darell Jones, chairperson said: “I’m so proud and privileged to be part of such a friendly and professional club which develop, encourage and enhance young talent in such a positive manner.

These skaters have made friends from across the County and beyond for life. I’d also like to thank our sponsors Gardner Aerospace and Aura Leisure for their continued support”

Head Coach, Vicki Usherwood said: “This achievement is three years of commitment, dedication and determination showing strength and persistence as a team who are go from strength to strength. These skaters have come through our development program and have proven what dedication and practice can achieve.”

They meet on Friday evenings between 5pm and 7pm.