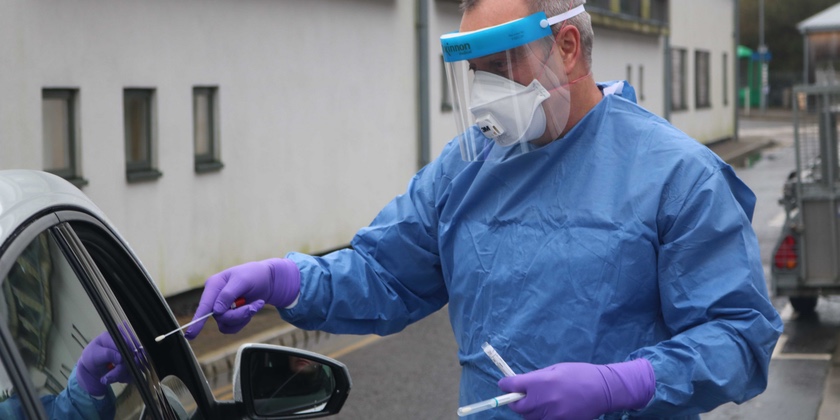 The father of a North Wales nurse visiting people in their homes has spoken of fears for his daughter’s health after revealing how little personal protective equipment (PPE) she’s been given.

The man, whose identity has been kept hidden to protect his daughter, said she had been given “one small package with one mask and a few pairs of rubber gloves” since the pandemic was announced.

He also claimed she had been given no supplies of hand gel to use while on her rounds in Wrexham.

He said: “She’s had virtually no PPE for weeks. She was recently given a plastic bag with a few pairs of gloves and one mask.

“No hand gel for a nurse visiting people in their homes – I think it’s appalling. She’s got kids and she’s having to go out to work each day and be put at risk.

“Welsh Government have not got to grips with this at all. They may be getting PPE in England, but not in Wales.”

The concerned dad paid tribute to the work his daughter is doing, and continues to do, under extreme pressure.

He said: “She gets home and gets completely undresses away from everyone before putting her clothes in a plastic bag and straight into the washing machine.

“She’s just getting on with it as all NHS staff are. I just feel sorry for them – it’s bad. They are not getting the support with the stuff they need.”

He said he found out the same was true of other staff when he went to have a blood test this morning (Monday).

He said he was told by a phlebotomist she had only been given three single-use masks.

He said: “The phlebotomist is face to face with patients on a constant basis.

“I mentioned she wasn’t wearing a face mask and she said she was given three single-use face masks a couple of weeks ago.

“She said ‘I will have to decide who I use face masks with’. To have face masks would give them some form of protection.

“Thank God they look like they are getting the army involved because they will get things moving.”

A spokesman for Betsi Cadwaladr Health Board said staff did have PPE and had arrangements with Welsh Government to ensure that continued.

He added: “We continue to follow the official advice from the Chief Medical Officer on the use of PPE.

“PPE should be used only in cases where staff are providing direct care to anyone with respiratory symptoms that could be due to Covid-19, including high fever and a persistent cough, or where Covid-19 has been diagnosed.

“If neither the care worker nor the individual receiving care and support is symptomatic, no PPE is required above and beyond normal good practice.”

“NHS organisations are able to use established routes to access supplies.

“Supplies of PPE are continuing to be distributed to health boards, the ambulance service, GPs and pharmacists and arrangements being made for social care settings to be supplied too.”