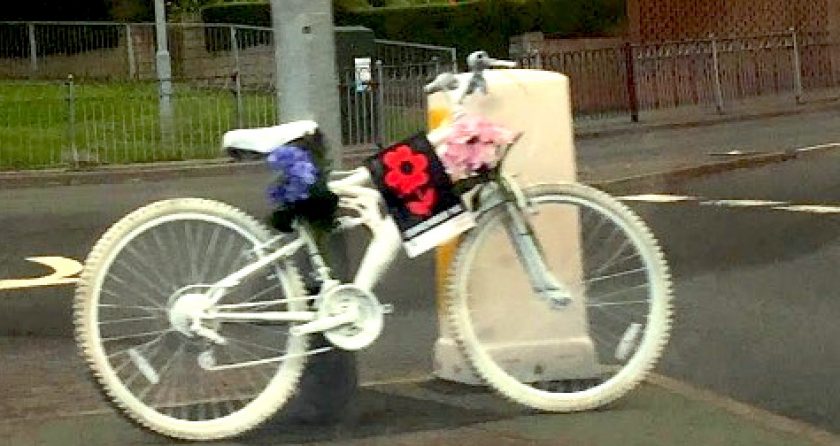 A ‘Ghost Bike’ tribute placed close to a roundabout in Connah’s Quay where cyclist Carol Boardman suffered multiple injuries, later resulting in her death, has been removed by Flintshire Council.

The white-painted bike, which had a memorial plaque and flowers attached, was left chained to a lamp post at the roundabout on Mold Road.

Council officers took the bike away at the end of last week following complaints it was distracting drivers and causing visibility issues.

It’s unclear who placed the tribute at the spot, the council said it has been trying to identify the owner and is waiting for them to make contact.

The plaque (pictured below) was supplied by RoadPeace – a national charity for road crash victims – as part of its ‘Remember Me’ campaign. 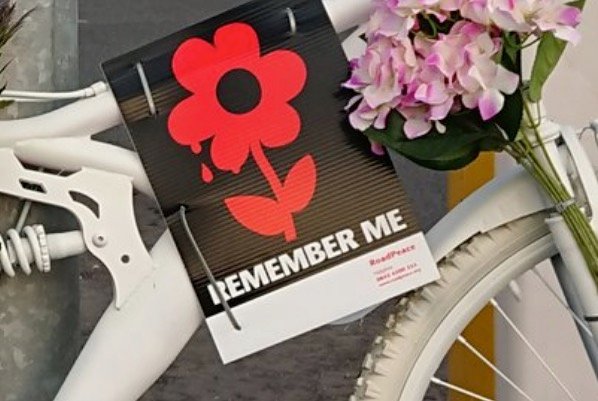 The charity says the aim of their plaques “is to provide a permanent memorial to lives lost and devastated through road crashes and provide a warning to other road users regarding the everyday risks of road use.”

A RoadPeace spokesperson told Deeside.com the charity was not responsible for the placing of the roadside Ghost Bike tribute in Connah’s Quay.

Carol Boardman died in July 2016 at the Countess of Chester Hospital hours after being critically injured at the Mold Road roundabout.

The 75-year-old mum of Olympic cyclist Chris Boardman had fallen from her bike and was struck by a pick-up truck.

Local man Liam Rosney admitted causing her death by careless driving and was sentenced to 30 weeks in prison.

Mrs Boardman’s family said they were not aware of the white tribute bike, but were aware of an organisation which place tributes at the scene where serious incidents had occurred.

“Streetscene Services received complaints last week from members of the public in relation to a white bike being placed on the roundabout at Mold Road, Connah’s Quay which was distracting drivers and causing visibility issues.

Initial investigations with North Wales Police and their Family Liaison Officer confirmed that the family were unaware of the placement of the tribute bike, but were aware of a national organisation that place monuments at points were serious incidents have occurred.

As yet the Council has not been able to identify the owner of the bicycle and it was removed last week.

The bicycle is currently being stored at the Council’s Depot and is waiting for the owners to make contact to collect the bike.”

“The Council is sympathetic towards memorials at the roadside and looks to accommodate tributes wherever possible, however we need to be considerate towards the location with respect to other highway users and sites need to be appropriate for the tributes being left.”