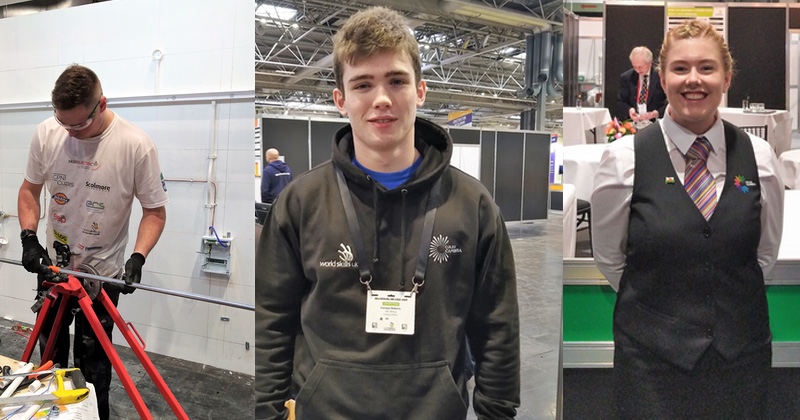 Students from Coleg Cambria will compete for places at the ‘skills Olympics’ in Shanghai next year.

Six learners from the north east Wales college have made the Long Squad for Worldskills.

The list is made up of 137 apprentices who will now join the event’s talent programme to try to secure a place on the team that will represent the UK at the prestigious skills contest.

The news comes after the college picked up medals at Worldskills UK LIVE in Birmingham last November, including silver winner Carwyn, and Charlie, who achieved bronze in the Manufacturing Team Challenge.

The competitors from Coleg Cambria are:

Rona Griffiths, Deputy Director for Learner Experience and Enterprise at Coleg Cambria, said: “It’s wonderful to see our learners have again been recognised as leaders in their fields. This is a huge honour for us and for them to be up alongside the very best apprentices in the country and will be a positive factor as they move forward in their careers.

“We wish them every success and hope they are among the final group to represent the UK in Shanghai.”

The apprentices and students will spend the next 18 months in training on a programme fitted around their studies and work commitments before a further selection process next year.

UK Government Education Secretary Gavin Williamson said the group should feel proud to have progressed so far, and added: “As someone whose job is to be an ambassador for this country and the fantastic range of skills and innovation our young people can offer, I’m excited to see another talented group of young people preparing to showcase their skills on the global stage.”

Dr Neil Bentley-Gockmann OBE, Chief Executive of WorldSkills UK, said: “It is fantastic to see such a strong squad of young people all of whom are aiming to represent the UK on the world stage in Shanghai.

“Congratulations to all of those on the WorldSkills UK Talent Programme, they really are the high flyers of their generation and should help inspire young people and parents everywhere – turning vocational snobbery on its head – showing that choosing a technical career is a clear route to success in work and life.”