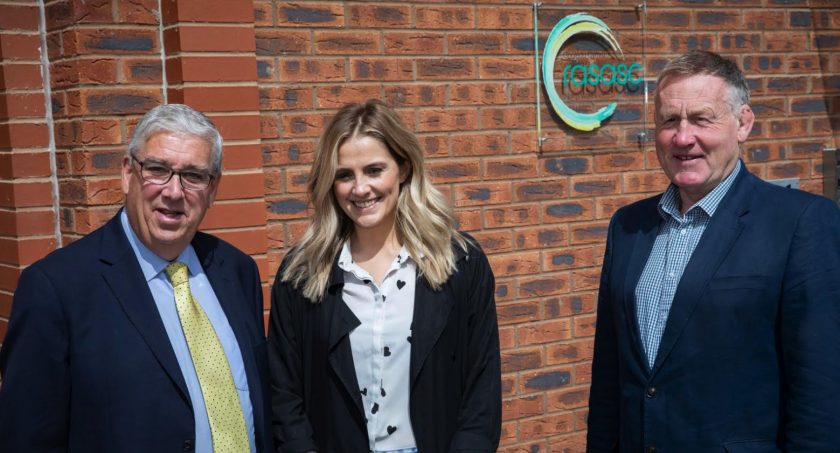 The number of cases being dealt with by crisis centre that helps victims of sexual abuse has doubled in the past 12 months, it’s been revealed

But, according to the North Wales Rape and Sexual Abuse Centre (RASASC), that’s a good thing because it means survivors are more confident about coming forward to seek support.

Acting chair Non Williams was speaking after accepting a cheque for £6,179 from North Wales Police and Crime Commissioner Arfon Jones.

Also at the presentation was pop star and TV presenter Elin Fflur who was among the stars at a fund-raising concert organised by Mr Jones at Bangor Cathedral, along with Dilwyn Morgan, a Gwynedd county councillor who is equally well-known as a stand-up comedian, radio and TV presenter, who was the compere.

The centre has been experiencing a significant increase in its workload after high profile cases like the Jimmy Savile scandal hit the news.

Ms Williams said that in the past 12 months 468 adults and 114 children from across North Wales have been helped, counselled and supported.

She said: “The Police and Crime Commissioner’s donation will mean we can reduce the waiting list for counselling services and also purchase play equipment for children in need of counselling.

“We provide counselling services to male and female, children and adults who have suffered sexual violence as well as historic cases.

“We are finding that more and more historic cases are coming to light because of a raised awareness. It’s the effect of high profile cases such as that of Jimmy Savile.

“We cover the whole of North Wales from Flintshire to Gwynedd and down as far as Merionethshire and we have seen our workload double in the last two years. Our 33 trained counsellors have, in the past 12 months, supported 468 adults and 114 children.

“That is a massive rise but we are committed to helping each and every victim of sexual violence and assault. I believe we will be asked to support even more victims in the coming years.

“We also have 11 support workers who support people before they go to court. Some people suffer with anxiety and we use an anxiety safe centre in Colwyn Bay as a safe haven.”

She added: “We have our centre here in Bangor and have two other centres, one in Holyhead and one in Colwyn Bay, but we will meet with and support people by seeing them in a variety of setting across North Wales.”

RASASC counsellor Eileen Dewhurst says the donation from the police and crime commissioner will be a massive help as they try to reduce waiting times for services.

She said: “We provide support and counselling services to anyone 13 or over who has experienced any kind of sexual violence, whether recently or a long time ago. And we also support partners and family members if there is a need.

“We will listen and we will believe victims. It is not our job to make judgements about victims or how they have coped and we will not tell people what to do.”

She added: “We just hope to provide a safe environment for victims to explore how they feel and to make their own choices as to the way forward.”

North Wales Police and Crime Commissioner Arfon Jones was delighted to have been able to support RASASC by donating the proceeds of the concert.

He said: “Dealing with and preventing sexual violence is a priority within my Police and Crime Plan.

“I was only too aware of the increased workload being faced by RASASC counsellors and decided to try and raise some much-needed funds that would help alleviate some of the issues.

“There is a real social value in addressing these issues and problems through the work RASASC. It’s about improving the quality of life for victims but it also has another important affect in that it reduces demands on staff of other statutory services.”

He added: “I’m also very grateful to Elin Fflur, Dilwyn Morgan, who compèred the concert, Côr y Penrhyn, Only Boys Aloud and all-girl folk band Tant who all performed. They all helped make the concert the huge success it was.

“To raise more than £6,000 was a fabulous achievement and I’m delighted to have been able to present the cheque to RASASC today.”

Elin Fflur added: “To help raise awareness of RASASC has been amazing. I have to admit I wasn’t aware of the sheer volume of work they get through. To visit the centre has been a real eye opener.

“For people who are the victims of sexual crime then RASASC must be a real haven. I can’t begin to imagine just how difficult and how horrific it must be to have to deal with a sexual abuse. It must be a shocking and life changing experience.”

It was a sentiment echoed by Dilwyn Morgan who said: “I was delighted to be able to support such a very worthwhile cause which affects all communities. It was a privilege to take part in the concert. Elin Fflur, along with all the others who contributed, was fantastic.

“To raise more than £6,000 through one event is staggering and it’s wonderful to see the Police and Crime Commissioner supporting such an important charity that is doing such amazing work.”