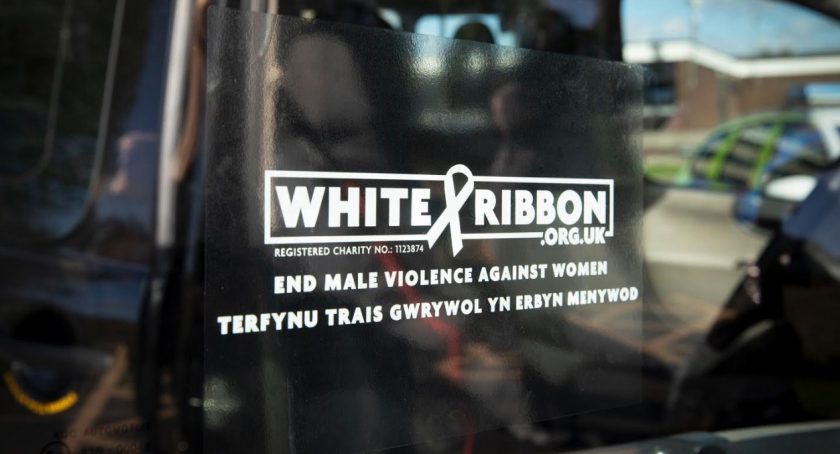 Cabbies from Flintshire will join more than 1,700 taxi drivers across North Wales in  a major drive to tackle violence against women.

Special window stickers are being placed in every licensed cab in the region as part of the White Ribbon campaign being championed by PC Mike Taggart, 37, whose own mum was brutally murdered by his stepfather when he was 15.

Earlier this year it was announced that all of North Wales Police’s 250  vehicles are also displaying the stickers.

The White Ribbon campaign is part of an international initiative established by men to end all forms of violence against women and girls.

Funding for the stickers has been provided by North Wales Police and Crime Commissioner Arfon Jones, for whom tackling domestic abuse in all its forms is one of the main priorities in his Police and Crime Plan, the blueprint for policing the region.

He’s delighted all six local authorities in North Wales have signed up to the initiative and made it a condition of the taxi licences that all vehicles must have a White Ribbon sticker on show.

Mr Jones, a former police inspector, said: “I am overjoyed  we managed to get support from the six county councils in North Wales.

“Their licencing departments for enforcement clearly understand the issues and the importance of requiring their taxies to display the White Ribbon.

“Mike Taggart is doing an absolutely brilliant job and there is no one more committed to addressing domestic violence than him.

“Tackling domestic abuse is hugely important to me which is why it is one of my top priorities.

“The number of homicide victims – two a week in England and Wales – is totally unacceptable.

“It’s vitally  important to raise awareness and the White Ribbon stickers are an effective way of doing so.

“The White Ribbon is quite a visible symbol and I would encourage more people to wear it.”

It was a sentiment echoed by PC Taggart who still bears the emotional scars left by the trauma he and his sister, Becci, suffered as teenagers.

They were utterly bereft when their mum, Donna Marie Crist, was murdered at her flat in Rhyl in 1997 by estranged husband Derek Evans after years of vicious alcohol-fuelled abuse.

Evans disliked her new-found independence after she started working with people with learning disabilities and once after she had been for a drink with friends, he attacked her in the street.

She left him but there was no escape and Evans went round to her new flat and stabbed her 11 times.

He said: “There are 1,750 taxis in the whole of north Wales so this is a great way of getting the message out.

“It’s a massive priority for the police and crime commissioner and in my role it  makes things much easier when you have somebody like Arfon who is really positive about the campaign.

“I want to make sure that people in my mum’s position don’t have to go through what she went through.

“The aim is to raise awareness of where support is available because we are dedicated to making sure people know they will be believed and can have real confidence that they can get the help they need.

“This campaign is targeted specifically at men with the aim of ending male violence against women.

“It’s basically about empowering men to not be bystanders to domestic abuse and to empower men to become ambassadors for the cause.

“The majority of the perpetrators are men, and if we can target the highest level of perpetrators then hopefully we can help lower the number of them which means we will have fewer victims.”