50mph speed limit comes into force on the A494 from today.

A blanket 50mph speed limit along the whole of the A494 both East and Westbound come into force today, Friday, June 22.

Overnight work has been taking place throughout the week in preparation for the new temporary speed limit.

The temporary restriction actually came into force on Monday but the relevant signage warning drivers of the change were only put up in the early hours of Friday morning.

The 50mph speed limit, according to a statutory notice published by the Welsh Government will remain in force for ‘a maximum duration of 18 months.’ 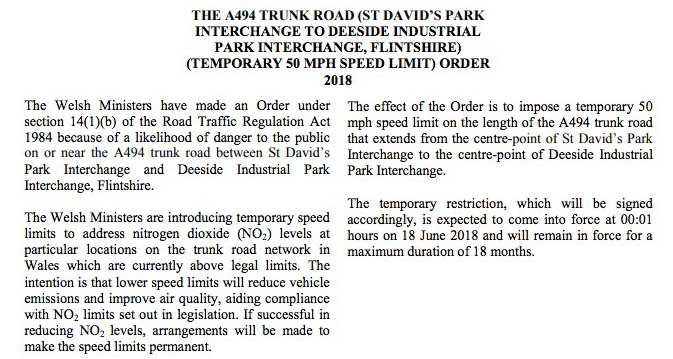 The measures are aimed at reducing levels of nitrogen dioxide where emissions have been found to exceed legal limits.

The 50mph restriction will apply from the B5125 St David’s Interchange (Holywell Road) to the A458 Deeside Park Interchange (Shotwick Road) at the Welsh/English border, and replace the national speed limit set on parts of the trunk road.

Poor air quality contributes to an estimated 2,000 deaths per year in Wales, with exposure affecting vulnerable population groups in particular.

Gases such as nitrogen dioxide can increase the symptoms of people with lung diseases, while short-term exposure is associated with increased cardiovascular and respiratory morbidity.

The measures are expected to deliver immediate improvements to air quality, with emissions estimated to potentially reduce by up to 18% at the five locations.

“I am committed to taking action to reduce air pollution in Wales to support a healthier future for our communities and protect our natural environment.

Current levels of nitrogen dioxide exceed the legal limit at the five road locations, so we need to act as soon as possible.

We have been carrying out investigations into all potential measures for reducing nitrogen dioxide levels.

Our initial studies tell us that 50mph speed limits should have the greatest potential to improve air quality at each location.

The actions we take to improve air quality in Wales have a key role in supporting the right conditions for better health and well-being.” 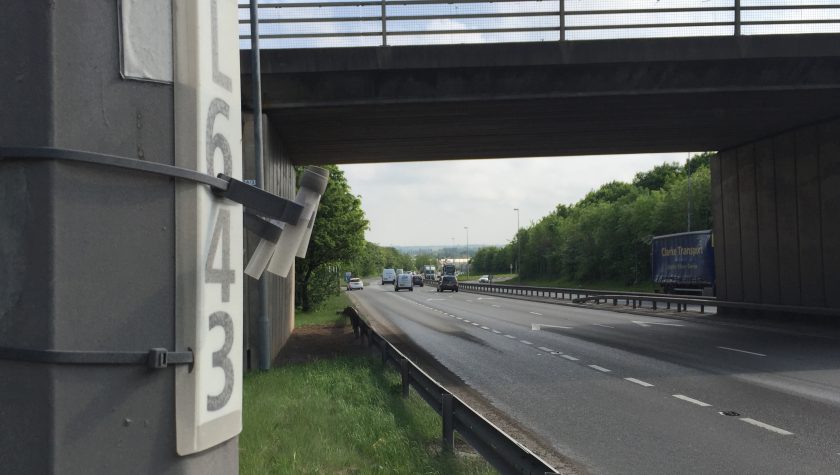 [Roadside emissions testing tubes on the A494 at Aston Hill]

Data published by a Welsh Government shows in 2016 shows nitrogen dioxide concentration levels along the A494 at Aston Hill reached 51.6 µg/m3 (micrograms per cubic meter air)

EU legalisation establishes health-based standards for a number of pollutants present in the air, it states that nitrogen dioxide (NO2) levels should not exceed 40µg/m3 over a 12 month period.

“I want to see concrete measures put in place by the UK Government which focus on removing the source of the problem.

They have prevented us from taking our preferred course of action – it is now time for them to step up and use the powers which they have so closely guarded for the benefit of the people of Wales.”

The root cause is the emissions from vehicles, but legislative competence for vehicle standards and fiscal measures, such as the Vehicle Excise Duty and Company Car Tax, remain with the UK Government.

Despite repeated calls, the UK Government has consistently refused to devolve powers which allow us to improve standards and incentivise improved emissions through the tax regime.”

A consultation is open until 19 June on plans to reduce concentrations of nitrogen dioxide, as part of the wider UK plan to tackle roadside NO2 concentrations.