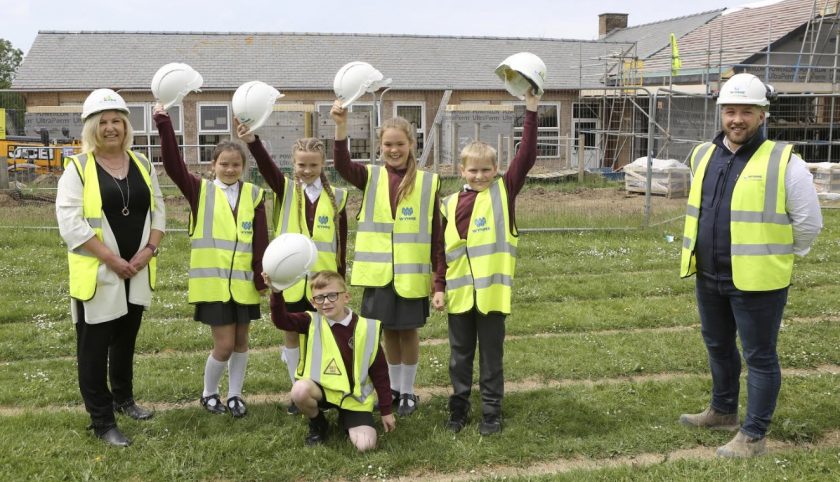 Work has begun on the first of 10 school sites to extend and expand pre-school provision for young children across Flintshire.

Wynne Construction has been appointed by Flintshire County Council to design and build a £7.1m programme of works, as part of a package of investment in the early years childcare offer at the 10 primary schools.

This will smooth the transition between pre-school and nursery by offering all-day care for three- to four-year-olds, with places available for children of parents paying directly, as well as those using their government-funded 30-hours per week free childcare provision.

Those 30 free hours also include a minimum of 10 hours a week of funded early education.

The Ysgol Brynffordd project, near Holywell, is progressing well, with members of Flintshire County Council attending to see the site first-hand.

The work, which will expand separate parts of the school, has been broken down into two phases. The first is currently underway, while the second is set to start in the summer. Completion is scheduled for January 2022.

The new Early Years Centres facilities have been designed with a combination of blockwork and pre-cast concrete slabs, as well as structural insulated panel (SIPs) walls, with the latter chosen for their insulating qualities as well as being environmentally friendly.

The scheme of works has provided Wynne Construction the opportunity to recruit new members of staff, including assistant site managers under the supervision of recently-promoted project manager Mark Wilson.

“Offering employees to grow and develop professionally has always been a priority for Wynne Construction,” he said.

“Having been with the company since I left school and been supported all the way through to a degree-level qualification, I can attest to that personally.

“We’re very pleased to have been selected by Flintshire County Council for this work and look forward to continuing the good relationship we have built up with the council over the years.”

Flintshire’s Leader and Cabinet Member for Education and Resources, Councillor Ian Roberts, said: “We have worked in partnership with Wynne Construction on numerous occasions in recent years and are very pleased to be doing so again on these early years projects, including at Ysgol Brynffordd.

“Once completed, the new facilities will result in improved care and education for the children of Flintshire, as well as offering enhanced support for their parents.

“We look forward to seeing the work progress.”