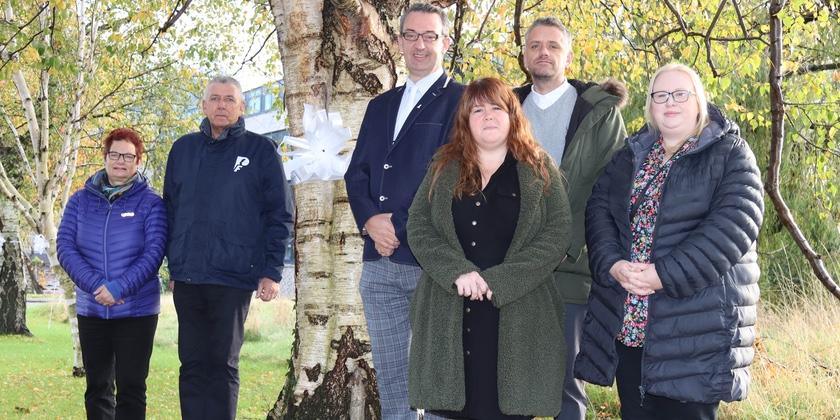 White ribbons have been wrapped around trees leading to the North Wales Police headquarters as part of global campaign aiming to stop violence against women and girls.

Taking place on November 25 each year, White Ribbon Day, aims to address the root causes of domestic abuse and change long established, and harmful, attitudes, systems and behaviours around masculinity that perpetuate gender inequality and men’s violence against women.

In the UK the day is spearheaded by White Ribbon UK, the leading charity engaging men and boys to end violence against women and girls.

The PCC gathered together representatives from some of the services he helps fund to support victims of violence against women and girls in North Wales all of whom joined to show their support for the initiative and the campaign, along with a representative from the North Wales Police Federation.

The Police and Crime Commissioner provides funding for services that help support victims of violence across North Wales.

Among those that joined the PCC at Force HQ to help decorate the road leading to the building were representatives from the DASU, Gorwel, and the Victim Help Centre.

Gorwel’s main focus is to provide support services in the field of domestic violence and homeless prevention and their projects include refuges, supported housing schemes, children and young people services, support in the community and an independent domestic violence advisory service.

The Victim Help Centre is a one-stop-shop for victims across the whole of North Wales and is based within at divisional police HQ in St Asaph.

Andy Dunbobbin, Police and Crime Commissioner for North Wales commented: “I was pleased to welcome DASU, Gorwel and the Victim Help Centre to North Wales Police HQ today to show our collective commitment to White Ribbon Day and the campaign to engage men and boys to end violence against women and girls.

“Ending this kind of violence is a personal mission of mine. I have a wife, mother, daughter, nieces and many other women and girls in my family and wider community and I believe all gender-based violence must end.

“I also believe that this must begin with those who are the greatest cause of this kind of violence – men and boys.

“That’s why I wanted to ensure our HQ was decorated with white ribbons and why I invited a number of the services I commission to join me so that we can show we all stand together – both for victims and for ending violence against women and girls.”

As this year’s White Ribbon Day falls during the start of the FIFA World Cup, the campaign’s focus is on their #TheGoal campaign to raise awareness about the challenges — and dangers — women and girls face in traditionally male-dominated contexts like the football pitch, but also public transportation.

Anthea Sully, Chief Executive of White Ribbon UK, said: “This year, White Ribbon Day is focusing on the attitudes and behaviours men and boys can adopt to move away from associations to violent and abusive behaviour.

“Men and boys are now expecting better from their colleagues, friends, and family to ensure women and girls are safe. We are inviting you to wear a White Ribbon and make the White Ribbon Promise, never to use, excuse or remain silent about men’s violence against women.”

She continued, “This year, White Ribbon Day falls on the same week as the launch of the FIFA men’s World Cup.

“There is never a better time for us to focus on the good that can come from unifying and supporting one common cause. #TheGoal does just that, it brings men and boys together to think about how they can make a positive difference to achieve equality and safety for women and girls.”