Lanes back open on M56 in Cheshire after a day of huge delays due to emergency repair work. 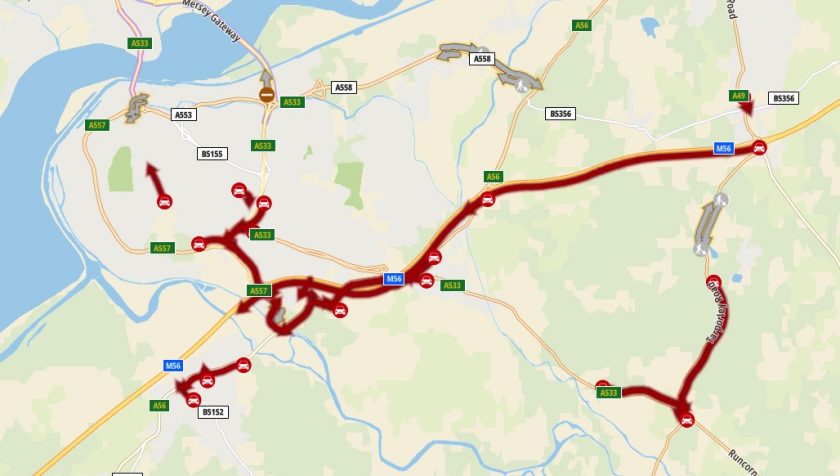 Update: At 9.15pm (Thursday 16 Sept) National, Highways announced it was reinstating the two lanes which had been closed off for most of the day for emergency repair work.

UPDATE: Assessment completed. We are currently in the process to remove the emergency closure in place. Thank you for your continued patience & understanding.#M56 emergency roadworks between J11 and J12. pic.twitter.com/Mk54Ol2iJF

Earlier report: There are reports of severe delays on the M56 in Cheshire this afternoon due to ongoing ’emergency repairs’ .

Two lanes of the North Wales bound side are closed at Junction 12, Runcorn, for works to repair an infrastructure defect that was discovered this morning.

Traffic is queuing back to Junction 10m at Stretton, delays are quoted at around 60 minutes.

There are delays of 60 minutes above normal journey times on the #M56 due to emergency roadworks between J11 and J12. For more information please follow this link https://t.co/OJOyte8eqw pic.twitter.com/R558TukqTY

National Highways said: “Road users are advised to expect delays on the approach to the incident and allow extra time for their journeys. ”

Latest traffic report for the area states: “Severe delays and queueing traffic due to emergency repairs on M56 Westbound at J12 A557 (Runcorn). Congestion to J10 (Stretton).”

“There are also long delays on the A56 through Frodsham as people avoid the motorway.”

“Lanes one and two (of three) are closed.”