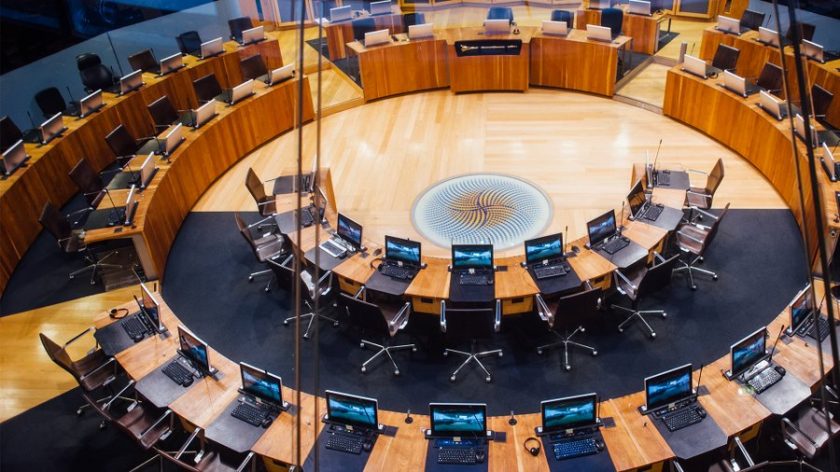 The Welsh Parliament could see a 66% increase of members if proposals reach full fruition.

Yesterday Welsh Labour and Plaid Cymru unveiled a “Co-operation Agreement” which will see the two parties work together on more than 40 new policies over the next three years.

The agreement includes supporting plans to reform the Senedd, based on an increase to 80-100 Members – compared to the current 60 Members. The existing members represent 40 constituencies and 20 ‘regions’ around Wales.

The plans are not a great surprise, as we reported last year when policy lines were drawn over the issue – at the time Welsh Conservatives said there was ‘no public appetite’ for the move, compared to Plaid Cymru claiming a “strengthened Senedd” was needed at a time when devolution was “under direct assault from Westminster”.

The Senedd’s debating chamber, called the Siambr, currently holds the 60 representatives comfortably and was actually designed to facilitate an increase in numbers with the walls at the rear effectively temporary structures allowing 80 MSs to be seated.

How the new Members of the Senedd would be elected is also planned to be looked at, with “a voting system, which is as proportional – or more – than the current one and have gender quotas in law” returning them.

As part of the agreement document titled “Reforming the Foundations of Wales” the joint Welsh Conservatives and Plaid Cymru document states, “With devolution under threat from this Conservative UK Government, we must send a clear message to Westminster that the Senedd is here to stay and decisions about Wales are made in Wales.”

“This means reforming our electoral system to enable Wales’ parliamentarians to represent people more effectively and seriously considering all options for the future of our constitution.”

The detail provided also states, “We will support the work of the Senedd Special Purpose Committee and introduce a Senedd reform Bill 12 to 18 months after it reports.”

Other elements stated in the section include “exploring the creation of a shadow Broadcasting and Communications Authority for Wales, to address our concerns about the current fragility in the media and attacks on its independence. This body would support the use of the Welsh language, particularly in digital and encourage media plurality. We believe broadcasting and communication powers should be devolved to Wales.”