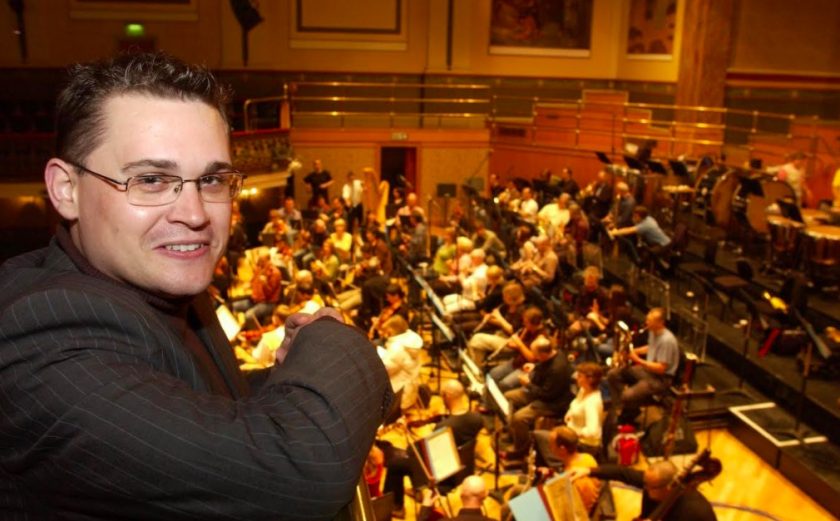 A royal composer from Flintshire has launched a passionate campaign to save Wales’ reputation as the Land of Song.

Professor Paul Mealor, who was raised in Connah’s Quay, spoke out as Patron of the North Wales Music Co-operative amid fears music lessons will be axed as a result of deep financial cuts in the wake of the Coronavirus crisis.

The organisation has just launched a new online resource, Totally Music, to enable it to provide singing and instrumental lessons to individuals and groups of pupils in different schools and at home for pupils shielded.

The award-winning cooperative is calling on the Welsh Government and local authorities to commit to ring fencing funds for music as an education priority.

St Asaph born Prof Mealor, who was brought up in Connah’s Quay, won worldwide acclaim after he composed the motet Ubi caritas, sung at the Westminster Abbey Royal wedding of Prince William and Catherine Middleton.

He also wrote a number of works for the diamond jubilee celebrations of the Queen as well as the music for the chart-topping Military Wives’ Choir, now featuring in a film starring Kristin Scott Thomas.

Prof Mealor, who is also a vice president of the North Wales International Music Festival, implored everyone involved in Welsh music, whether a player, singer or a fan, to shout about the campaign from the rooftops.

He said: “We are not just fighting to save music for the sake of music itself but for our children’s futures. The health of our education system depends on this.

“We know for a fact that the benefits of learning music are immense. Studies in the UK and the USA have shown children who learn to sing or play an instrument do better in other subjects such as maths, English, science and the arts.

“There is no doubt music is one of the essential building blocks of a rounded education. Schools who cut lessons do so at their peril. Music is a cornerstone of the curriculum and as such it should be fiercely protected.

“I know from first-hand experience how our lives are enriched by music and we should not be denying our younger generations the opportunity to learn music in all its forms. I would not be the person I am today were it not for those early music lessons I enjoyed in school.”

Drastic cuts have already been made to school music provision in England over recent years and now teachers in North Wales fear that Wales may follow suit as those in charge of budgets struggle to find savings.

Authors of The State of Play, a report by the Musicians’ Union issued last year and supported by UK Music and the Music Industries Association, described music education as being ‘in a perilous state’.

Many teachers in North Wales are now afraid the area’s state school music departments will be the next to feel the pinch.

If free or subsidised primary and secondary school lessons are axed they say it could mean the chance to have singing lessons or learn to play an instrument is only available to a privileged few whose families can afford to pay for private tuition.

Prof Mealor added:“I come from a typical North Wales background. If I hadn’t benefited from free school lessons I don’t think I’d have progressed to the stage where I could fulfil my dream of a music career.

“Apart from the academic value, music is also invaluable for our mental well-being. It helps children flourish in so many ways. Those who struggle to express themselves through words often find they can express themselves through music or through the choice of music they play. The great poet Maya Angelou put it best when she described music as a refuge from life’s turmoils and troubles. Through music she said she could ‘curl her back to loneliness’.

“This is why we really do need to campaign with all our might to protect music lessons for future generations, to shout about this from the rooftops.”

She said: “Equality of access is a great concern of mine – music is becoming elitist and for the few that can afford lessons.  Schools have pulled subsidies due to lack of budget and again music services are suffering.  This is a vital service and one that has faced cut after cut in recent years – I have cupboards here full of instruments and no funds to repair them for use by pupils’’

“Whilst our co-op has been a huge success – it’s been very difficult to run things on a shoestring – and we need to see the Welsh Government protecting music services with funds moving forward.”

Ms Powell recruited a dedicated membership of music teachers across the region to launch the co-operative, after she found herself redundant from a brass teaching post after 10 years. She initially set up the Denbighshire Music Cooperative in the front room of her home.

Some six years on the service has won several major awards, including being listed in the top 100 New Radical Businesses in the Observer and winning a variety of business awards for its high-quality provision and reach.

In 2018 a sister Wrexham cooperative was established after all Wrexham tutors also faced redundancy.  Together the North Wales Music Co-operative now covers 200 schools with a team of 65 music tutors, all self-employed.

But Heather said she fears the swingeing? cuts will go on as schools may now cut the very lessons which are the lifeline of the co-operative.

She said: “I have recently become very concerned over the lack of funding for music services – many will struggle to survive after Covid.

“I am struggling to keep the service going after losing all income due to Covid – and fearful for the implications for the future.   I myself am a former performer with Wales National Ensembles and I know what pride that gave to me whilst growing up – all of our National Ensembles are at crisis point and grass root music is disappearing’’

“We have no core income whatsoever and rely upon grants – although Wrexham do pay for pupils to access lessons who are on free school meals.

“With Covid hitting education there is a distinct concern over mental health – music as you know can help with this and yet music services in the so-called ‘Land of Song are dying.

“I am fearful for the future of music in Wales.  We may be putting millions into theatres and other venues but, without young musicians coming through schools’ music systems there will be no orchestra or choirs in the future to be on these stages.  This service is vitally important but needs funding properly to enable us to help reach out to pupils and ensure music is on offer to all”

Cllr Mark Young, who is chairman of the North Wales Music Co-operative, said the campaign was among the most important to confront the Welsh education system in years.

He said: “We live in the Land of Song and we need to protect that mantel and preserve our heritage. We cannot do that by axing music lessons. It is imperative for the growth of future performing and creative talent in our nation that funds for music are ring fenced.

“We call on all local authorities and the Welsh Government to get behind music and preserve this nation’s reputation as the world champions of music.

“Our culture has been built on music in all its formats, from the National and Urdd eisteddfods to the international eisteddfod at Llangollen where every year we invite the world in to see what a vibrant musical nation we are. We cannot let that all simply slide away.

“We have a wealth of talented professionals and music teachers who are proud to be passing on their skills in schools and colleges. Long may they continue to do so.”