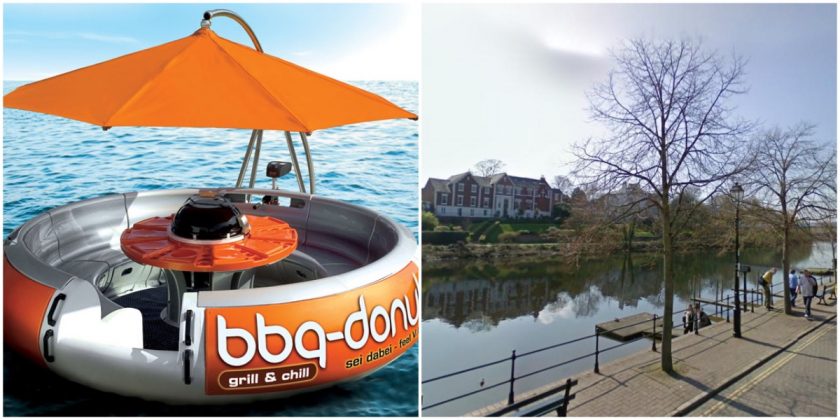 A floating pontoon for motorboats where people can have barbecues and drink alcohol on the River Dee in Chester has been given the go ahead.

Cheshire West and Chester planning chiefs voted in favour of the plans when they met yesterday (Tuesday), despite objections being raised by local residents and a number of rowing clubs.

It will see the installation of a floating pontoon with a single storey kiosk and walkway access onto the promenade at The Groves, positioned between the Chester bandstand and Chester river boats.

According to the planning application, the pontoon is intended to be used to moor two circular motorised boats known as ‘bbq-donut’ boats and a third safety boat.

The applicant has set out that customers will bring and cook their own food on the boats. Alcoholic beverages would be provided by the business.

A report to the committee said the pontoon was ‘not out of character’ in the area. It added: “The concerns around inclusion of two additional boats (plus safety boat) to the river is noted, however it is not considered to tip the balance of significantly affecting other river users, especially when balanced against enhancing the existing tourism offer and having regard to the aims of the Chester Waterway Strategy.”

Andrew Conroy of Navis MC Ltd, who along with his brother Michael, plans to rent out the boats. He told the committee: “Although a new concept for our county, it’s not a new idea. It’s a success globally and in London. We’re a small setup, only needing a small area among the public moorings.

“Our plan is to provide access to the river for an alternative recreation and leisure purpose, enhancing the city’s tourism.”

The application had been called in to the planning committee by Cllrs Neil Sullivan and Razia Daniels, due to concerns regarding the development’s impact on public interest.

At the meeting, a written statement read out on behalf of Chester City and The Garden Quarter Cllr Bob Rudd (Lab), said: “I have received representations from residents in The Groves raising concerns about noise and the consumption of alcohol and believe the proposal to be completely out of character with the area. I ask the planning committee to note that I share the concerns of the residents.”

Members of the committee also raised concerns about opening hours as well as the type of boats which would be allowed to moor at the pontoon. It was agreed to include advisories around both issues if permission was granted.

An initial motion to reject the application was voted down, with the subsequent motion to pass it subject to the above advisories being approved by eight to two.


Tweets by Deesidedotcom
Wednesday May 25th 17:44