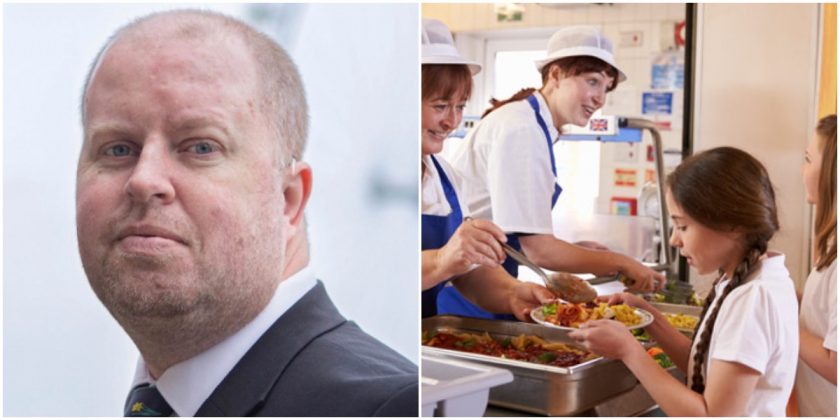 A Flintshire MP has criticised a Welsh Government proposal to provide free school meals for all primary school-age children.

Welsh Labour and Plaid Cymru unveiled a “Co-operation Agreement” earlier this week which will see the two parties work together on more than 40 new policies over the next three years.

Covered in the joint policy programme is the delivery of free school meals to all primary school pupils.

Delyn MP Rob Roberts said the move would see free school meals given to the most well-off families in Wales, he wants a more targeted approach for those who need help the most.

The Children’s Commissioner for Wales has welcomed “with open arms” the proposal, Sally Holland said it would also help reduce the stigma suffered by children who claim free school meals.

Roberts has claimed there is no stigma attached to free school meals, “other than when well-meaning people keep saying that there is.”

Research by the Institute for Social and Economic Research found that nearly one third of all children eligible for free school meals preferred not to take them, with stigma in the delivery of meals identified as one of the main reasons against uptake

The Children’s Society has shown that this stigma can significantly harm take-up of free school meals for children of low-income families and the Senedd have found children may choose to go without lunch rather than risk embarrassment and bullying.

Drawing on his experience as a child who received free school meals when his parents were in a ‘difficult situation, Roberts said in a Facebook post:

“Some 35 years ago, I benefitted from free school meals when my parents were in a difficult situation and in need of support.”

“There was no stigma, no embarrassment or issue with that at all.”

“People talk a lot about stigma. I respectfully submit that there is no stigma, other than when well-meaning people keep saying that there is.”

“In reality, there is absolutely no shame in people falling on hard times and needing some help. It can happen to the best of us.”

Roberts said: “I wonder if we asked each headteacher in local primary schools”

“I suspect the vast majority of them would rather have these massive amounts of resources focussed on delivering better outcomes.”

The Delyn MP has written to education minister Jeremy Miles MS “to ask that he re-consider this position, target the support to where it is needed, and instead focus those funds on increased staffing and resources to drive up standards across Wales.”

Responding to his Facebook post, Jack Bailey commented: “I’m not entirely sure your intuition is good enough grounds to comment on whether or not there is a stigma on FSM (free school meals).”

“Have you spoken to teachers in your constituency about this?”

“I know of many teachers who live in your constituency who I am sure would disagree with your claims here.”

“Your solution of “don’t talk about it because that perpetuates it” is sloppy at best and I think you know that too. ”

“A lack of open discussion and listening is rarely conducive to solving issues.”

Jack Bailey added: “In terms of outcomes, you of course raise an important point that we want to see high standards in all schools for all children.”

“I would simply ask whether you have read the wealth of available literature on the impact on classroom performance that varying levels of nutrition have?”

“Ensuring that every child receives at least one good quality, nutritious meal a day would go some way to improve standards.” he said.

Roberts issued a press release yesterday in which he said he “fully supports the policy of providing free school meals to those who most vitally need it.”

“I want to ensure that my constituents continue to be supported as much as possible as a great many families in Delyn benefit from this scheme as I did myself at times all those years ago.”

But he said: “The £140 million cost of extending free school meals to every child – which equates to £114,600 per school per year – could provide three new teachers, six new teaching assistants, or new computer equipment and a vast array of other learning resources to every school in Wales.”

“These extra resources would make a massive difference to students’ education in Wales.”

“Instead of extending the policy to include everyone, we need a more targeted approach that ensures our most vulnerable families are supported and also ensures that students in Wales receive the best possible education.”

“I want to ensure that my constituents continue to be supported as much as possible as a great many families in Delyn benefit from this scheme as I did myself at times all those years ago.”

“Our members know only too well the impact poverty has on our learners from a health and educational perspective.”

“We would like to see the evidence that suggests such a universal provision is the solution to the issue of some children not qualifying for FSM due to an outdated criteria formula, the modelling on how much this is going to cost and any analysis that shows that giving every child a free school meal provides an educational benefit as opposed to fixing the problems in a broken system and putting the extra funding into frontline teaching and learning.”