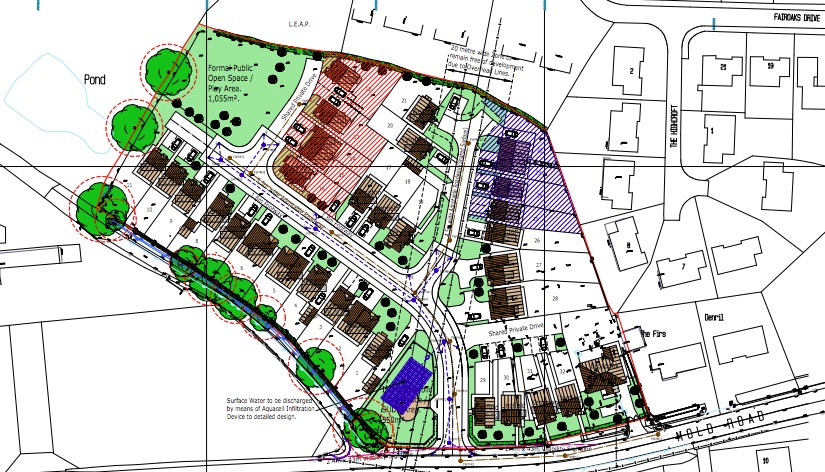 Plans have been submitted to build 33 new homes in a *Connah’s Quay.

The proposals by Edwards Homes would see houses constructed on land at Broad Oak Holding off Mold Road in Connah’s Quay and an existing building demolished.

The majority of the site is currently taken up by a paddock with an old detached two-storey farmhouse and several outbuildings, which are said to be in a poor condition.

The proposed development sits next to another site where 37 homes are being built by MJ Davies Ltd. after permission was granted on appeal in 2014.

In a statement accompanying the plans by consultant Philip Moren, he said: “The proposed development involves the construction of 33 dwellings (29 detached and four semi-detached), which include a replacement three-bedroom bungalow for the existing old farmhouse on the site. The remaining dwellings would all have two storeys.

“(It) includes the construction of a new access road off Mold Road and the provision of an area of public open space in the north-western corner of the site.

“The design of the proposed development has been conceived with the following main objectives in mind: the provision of a housing development that makes the most effective and efficient use of greenfield land, whilst being appropriate in its character and design to its setting.

“The proposed development would make adequate provision for affordable
housing in accordance with the council’s policy requirements.”

Flintshire Council has told the developers that it wants to see nine affordable homes built as part of the scheme, which would be a mixture of two and three-bedroom properties.

To reduce the impact on neighbouring houses, the company is planning to make sure the new buildings are placed at an appropriate distance.

They said that they did not believe additional traffic from the site was likely to have a major impact on nearby roads.

Mr Moren said: “For the reasons given above, it is considered that the proposed development is in accordance with the relevant provisions of the development plan and national planning policy, so would be acceptable.

“None of the proposed dwellings would result in any unacceptable reduction in the living conditions of neighbouring occupiers by reason of overlooking, overshadowing or overbearing impact.

“It is therefore very much hoped that the planning authority will support my client’s application and grant planning permission for the proposed development.”

*Location has been changed from previously stated Northop to Connah’s Quay.