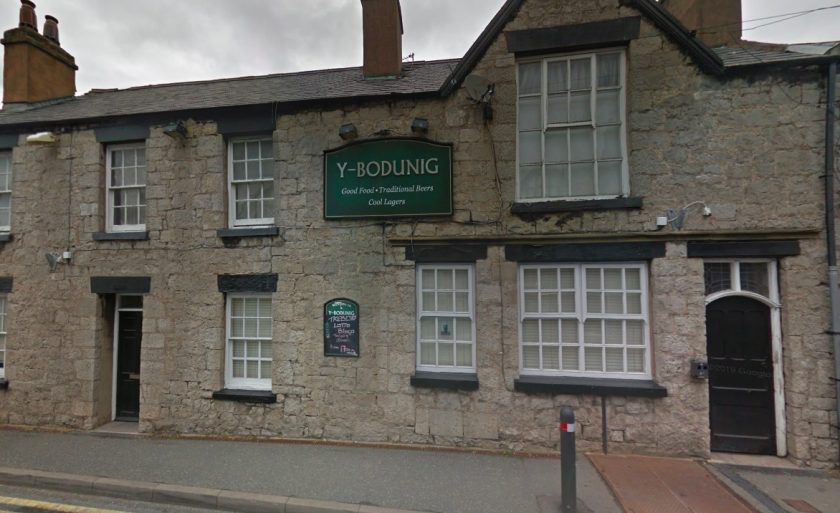 A North Wales pub has had its licence revoked after police said managers put public health at risk by continuing to serve customers after the coronavirus lockdown was declared.

In some cases, officers reported punters were sneaked in to Y Bodunig in the village of Dyserth under the guise of being tradesmen.

Despite carrying tools such as a buzz saw and a ladder, a Denbighshire Council licensing sub committee was told there was no evidence of any work being carried out and CCTV footage showed them drinking pints.

The pub first came to the attention of North Wales Police in the early hours of March 21, not long after lockdown was introduced, when officer noticed lights on at the pub.

They decided to check on the venue on the High Street and found at least 15 people in the bar and someone else in the lounge.

Derek Coulton was in charge at the time, even though he was previously stripped of his role as designated premises supervisor.

He apologised for the incident, but insisted the people seen coming and going from the pub in the following weeks had genuinely been there to carry out refurbishment work.

However, police solicitor Gareth Preston, who today (Thursday, 20 August) outlined the force’s case for it to be closed, said it was an attempt to hoodwink officials.

He said: “Mr Coulton’s actions have put people at risk of virus transmission when government advice could not have been clearer.

“While the public house was not exactly full to capacity on occasions, the risk of transmission between the patrons and all who they subsequently came into contact with, simply cannot be calculated.

“He has been dishonest, obstructive and indeed devious in his attempts to continue licensed activity during the lockdown.

“The behaviour has continued notwithstanding the obvious police and council interest and the risk to the public.”

The committee was told of a string of cases where neighbours had reported customers drinking inside the pub after the first incident.

A PCSO attended the venue on the evening in March 29th where he heard voices from within which stopped when he knocked on the door.

Following a delay, he was allowed in and found Mr Coulton alone watching TV at the bar, who said a plumber had been to the property earlier that day.

The officer carried out a search of the premises and could not find anyone, however he was unable to access the flat above as the manager said he did not have the key.

CCTV footage later showed people arriving via the back door earlier in the afternoon before grabbing their belongings and hiding in the locked off access area upon the PCSO’s arrival.

Mr Coulton’s son Daniel was also witnessed bringing a circular saw into the pub and sprinkling sawdust on the bar, but police said no work was carried out and it was used as a cover for people to go in and drink.

Mr Preston said: “There’s nothing to address what is alleged with a male seen taking a saw into the property, sprinkling sawdust onto a surface and a piece of wood being put into the saw, simply creating the illusion of work being undertaken to hoodwink the authority in due course.

“It’s incredible to think he didn’t mention the allegation of people hiding in the flats while PCSO was kept waiting to give them time to hide.

“He did not address it presumably because there is no suitable innocent answer for this committee.”

Further allegations were made that when the police licensing officer for the area attended the pub on March 31st, there was a man present stood on a ladder.

Mr Coulton admitted supplying him with alcohol and was told to stop by PC Manus Sheridan, but camera footage showed the man coming down from the ladder after he left and laughing with the manager as he continued drinking.

He was criticised for hosting a meeting of scooter enthusiasts earlier this month, where an environmental protection officer said there were no social distancing measures in place.

Mr Coulton was also accused of making deliberate efforts to destroy CCTV footage before it was due to be collected by officers.

He claimed the loss of data was caused by a power cut, but members of the force’s hi-tech crime unit who later recovered it said it was more likely to have been done on purpose.

In his defence, he apologised and said he’d had genuine reasons to call workmen to the venue, with any money taken from them for drinks due to be given to charity.

He added he had recently stopped working at the pub and refuted the suggestion by police that his role as supervisor was revoked partly because of drug use on the premises.

Mr Coulton said: “There was no drugs involvement whatsoever and I’m really quite upset that the police have said that there was drugs involved.

“Anyone that was in the pub were the people that carried out work. There was never more than five people in the pub, which has not been stated.

“I’ve been slated all over the radio, television and the papers before this inquest had even started. My stress levels are unbelievable.

He added: “Regarding the CCTV equipment, it was a fault on the system that I had the man come out several times because I couldn’t even get it on my phone.

“Myself and my son are extremely anti-drugs, especially given that my daughter was killed in 2008 by a drunk and drug driver.”

Dyserth county councillor David Williams said he did not condone what had taken place at the pub, but felt it was a shame if it was made to close down.

The current premises supervisor Nihat Colakoglu said he wanted Mr Coulton’s son Daniel to taken on the running of the pub to appease some of the concerns.

He claimed to have no knowledge of what had happened during lockdown because he was self-isolating, but said what Derek Coulton had done was wrong.

He went on to accuse PC Sheridan of having a personal problem with the management team.

He said: “I reckon Mr Sheridan has got a personal issue, because when this matter came forward, I tried to make a deal with him about how we could go forward but all he said was sell the pub and there was no way back. I found it very offensive and upsetting.”

He added his nephew Abdulhamit Salih Colakoglu, whose name the pub’s licence is under, was also away working as a doctor helping people with the coronavirus in Turkey

However, PC Sheridan pointed out Nihat Colakoglu only lived nine doors down from the premises and being away did not absolve his nephew of his responsibilities.

Mr Preston said it would be inappropriate for Daniel Coulton to take on the management, citing an incident outside another premises he runs, where customers were reportedly taking drugs outside the Swan Inn in St Asaph.

After considering the report and all of the submission made during the hearing, the committee unanimously decided to revoke the premises license for Y Bodunig.

In a statement issued this afternoon, members said: “On the basis of the evidence provided and in light of the catalogue of incidents at the premises during March and April 2020 set out in that evidence, the licensing sub committee was satisfied that the premises have been run in such a way that is contrary to the prevention of crime and disorder and promotion of public safety licensing objectives.

“The licensing sub committee were of the clear view that the premises need to be properly managed in accordance with the relevant law and guidance and were particularly aware of the need to protect public safety at this difficult time in light of the current public health crisis arising from COVID 19.

“The failure to properly manage the premises to date has therefore led to the sub committee’s decision to revoke the licence.”

The pub’s management will receive a copy of the full decision within five working days when they will then have the right to appeal it.