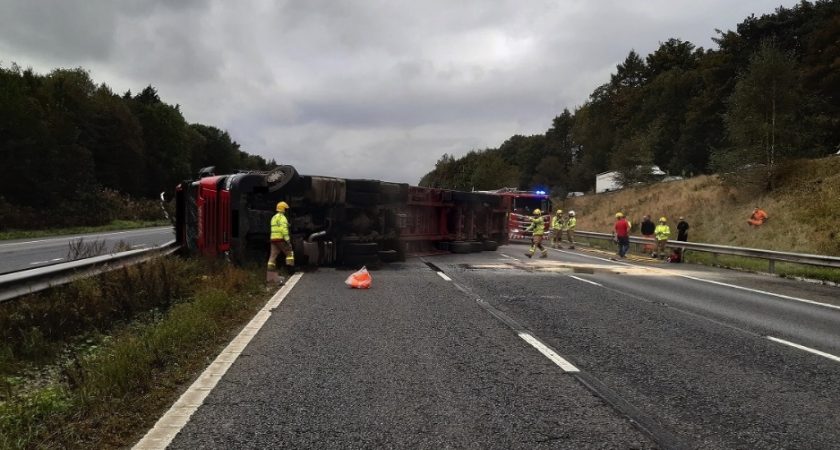 Update: In an update on social media, National Highways confirmed at 5.47 am that all lanes are back open.

Update: A section of the M56 eastbound in Cheshire remains closed at Stretton after a lorry overturned on Wednesday afternoon.

The incident happened at around 2.45 pm causing long tailbacks on the eastbound side, traffic was also affected on the westbound carriageway as a lane closure was put in place there.

The overturned HGV was recovered at around 7.30 pm however the carriageway is being resurfaced due to a fuel spillage.

“This works will be completed overnight and we hope to reduce the closure to just within J10.” National Highways said

A traffic report for the area states: “Road closed due to emergency resurfacing repairs on M56 Eastbound at J10 A49 Tarporley Road (Stretton). The road has been closed since Wednesday afternoon after a lorry overturned. Repairs to the road surface are expected to be ongoing throughout the night. Detour in operation – via the exit and entry slips.”

Earlier report: There are long delays on the M56 after a lorry overturned.

The incident happened just before 2.45 pm near junction 10 for Stretton.

The motorway is currently blocked eastbound at Stretton and there is around 5 miles of queuing traffic back to Sutton Weaver.

There are also long delays on the westbound side due to a lane closure opposite the scene. 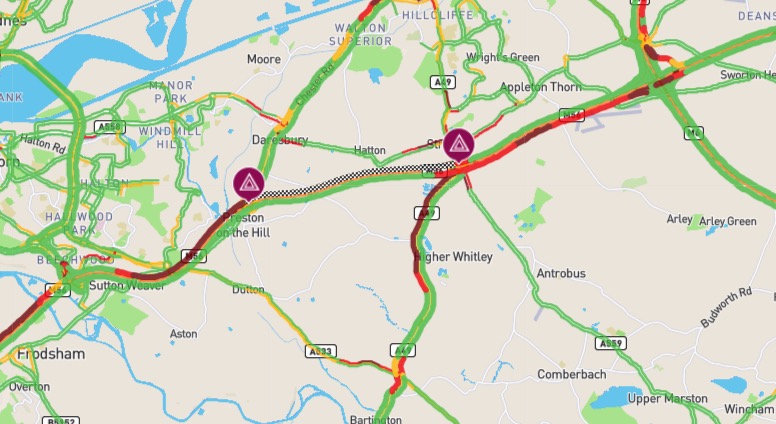 Greyed out lane shows the location of the eastbound closure

Latest traffic report for the area states: (Eastbound) “Road closed and queueing traffic for five miles due to rolled over lorry on M56 both ways at J10 A49 Tarporley Road (Stretton).”

“Congestion to beyond J11 (Preston Brook) for eastbound traffic, and to J9 (Lymm Interchange) for westbound. ”

“The road was closed around 14:40, the lorry overturned on the eastbound side.”

“A diversion is in operation via the solid black diamond symbol. Using the A56 the A533 through Dutton, and the A49 through Whitle.”

Police have confirmed no injuries have been reported.

A very busy day continues – M56 East Bound through Jnc 10 is closed due to an overturned LGV – No injuries reported thankfully @HighwaysNWEST will be closing Jnc 11 Eastbound and traffic is to follow the signed diversion route pic.twitter.com/x6ITRwy8s1