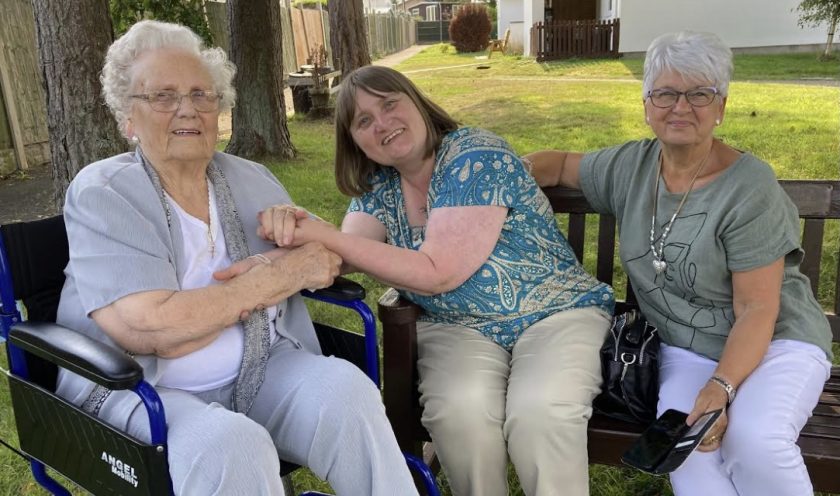 A TV investigation stretching from North Wales to South America has made two dreams come true for a 91 year old great grandmother who was adopted when she was just a few weeks old.

Retired carer Myra Williams, from Caernarfon, has been reunited with long lost relatives from Flintshire and she has been able to arrange for flowers to be laid on the grave of her beloved brother who died in a tragic accident in Brazil in 1953 at just 17 years of age.

Myra knew she had been adopted and always yearned to know more about her birth family.

Her other dearest wish was to discover the grave of her brother James Evans.

Despite being his adopted sister, both grew up as close as natural siblings and she was devastated when he drowned in a canoeing accident near the Amazon jungle in Brazil nearly 70 years ago.

Myra and her daughter, Avril Jones, who both live in the Twthil area of Caernarfon, turned to the S4C programme, Gwesty Aduniad (Reunion Hotel), produced by  Caernarfon-based Darlun for help. 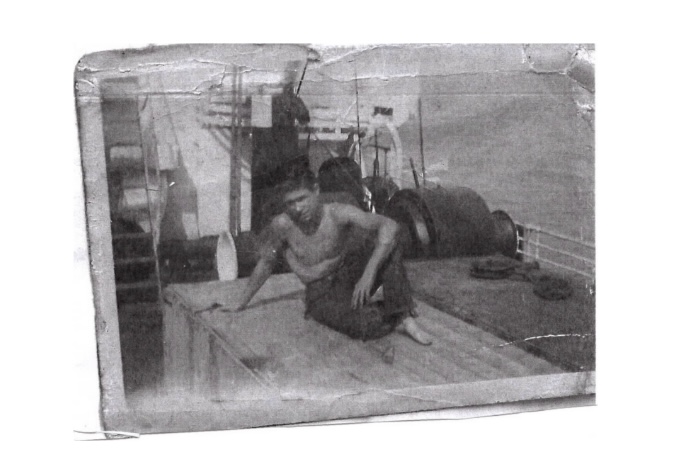 The emotional story will feature in the penultimate programme of the series on S4C on Tuesday, October 4 at 9pm. English subtitles will be available.

During the programme, Myra meets her niece, Annette Vaughan Davies, 46, from Mold, for the first time.

Gwesty Aduniad brings people together who have lost contact or who want to make contact for the first time, took on Myra’s case who is their oldest contributor yet.

Her mother, Nancy Davies, was born in 1910  and was 21 and single when she gave birth to Myra.

Meanwhile, Myra was brought up by her adoptive parents, John Henry Evans and his wife, Elizabeth, but sadly Mr Evans was killed in action during the Second World War whilst serving aboard a minesweeper in the Atlantic.

Avril said: “My mother had a very good upbringing and did not want to upset her adoptive parents by trying to find out about her birth parents.

“The papers gave the name of her birth father as William Chamberlain and that of her mother as Nancy Davies but nothing else.

Avril added her mother knew she had been adopted from an early age but she didn’t know any details until she was at the hairdressers when someone said she looked just like her “real grandmother”.

“I went home and asked my mother about it and she told me it wasn’t me who was adopted but that she had been adopted as a baby.

“After that she would often say on her birthdays “I wonder if my mother is thinking about me,” said Avril.

The programme also took on another wish close to Myra’s to find her brother’s grave in far-off Brazil.

He had joined the Merchant Navy aged 16 and made several voyages on the SS Hilary, a ship which spent much of her career on a scheduled service between Liverpool and Manaus in Brazil. 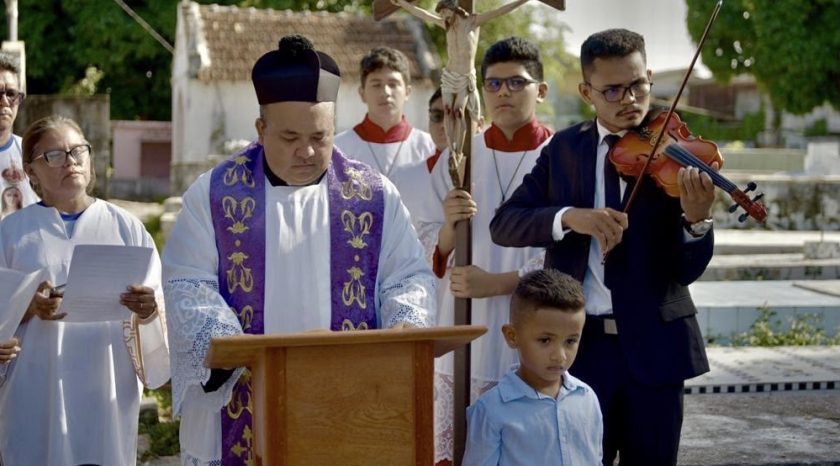 The touching service to lay flowers on the grave of Myra’s brother, James Evans, in Brazil

In 1953, aged 17 his ship was off Cocal, Brazil, and James was canoeing with two shipmates in the delta region where the Amazon and Tocantins rivers empty into the Atlantic Ocean when the craft capsized.

Avril explained: “He was not a strong swimmer and he drowned. His shipmates found the body and arranged for him to be buried locally. The family paid for a headstone but since his burial, my mother, who was very close to James as they had been brought up like brother and sister, has wanted to see if she could finally lay flowers on the grave.”

Portuguese-speaking Gwesty Aduniad researcher Elinor Churchill started her inquiries with the local authorities in Brazil and discovered the grave was in the small town of Sao Sebastiao da Boa Vista, Brazil.

Gwesty Aduniad producer Gwen Griffith said when they were told about Myra’s wishes they made every effort to help.

“They arranged for the gravestone to be cleaned and a short service was organised and a young boy laid flowers on James’ grave. This was filmed and we were able to show it to Myra and Avril,” she said.

The expert Gwesty Aduniad researchers also found that Myra’s mother married a few years after she was born and gave birth to three boys.

Gwesty Aduniad producer Gwen Griffith said one of the boys had fathered a son and daughter both of whom were contacted.

Myra was surprised but delighted, to find out she had brothers and a niece, Annette Vaughan Davies, and nephew, Hywel Davies. 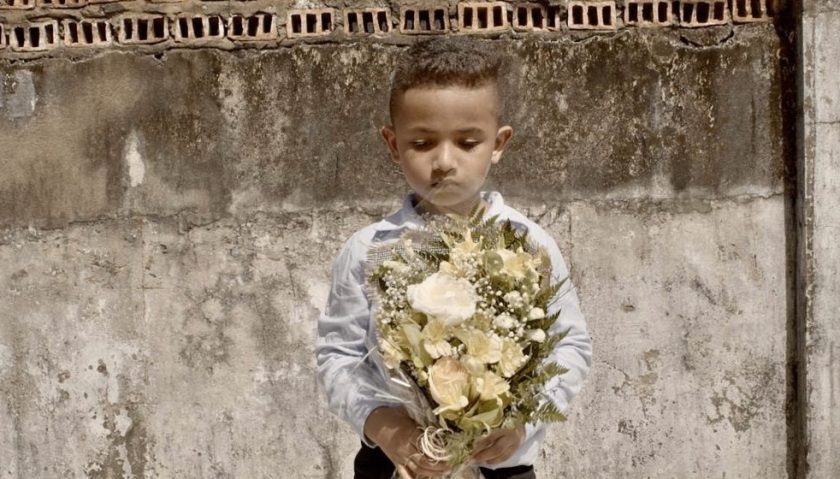 Annette  was equally amazed to find there were members of her family living in Gwynedd and the programme shows their emotional meeting.

She said her father has passed away but had been a nurse in his working life. He would have “welcomed with open arms” Myra into his family.

Annette added: I’m a little bit shocked but in a nice way because it’s always nice to know there’s people out there and the fact that Myra is the age she is and has done this is amazing.”

Annette was able to show Myra and Avril pictures of her family including Myra’s  brothers and she gave her dad’s nursing union badge to Myra.

“I wanted her to have it because it’s all I can do apart from giving her a hug and tell her she would have been welcomed into our family, It was very emotional but very lovely too,” said Annette.

Reflecting on the work of the research by Gwesty Aduniad, Avril said: “Mum has been looking for so long to find out about her family and its come to an end and in a very happy way.” 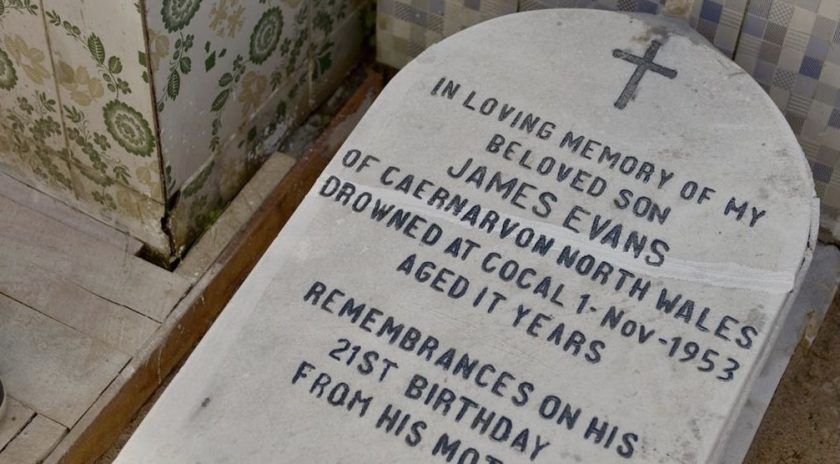 Myra added: “It’s been emotional but I’m happy it’s happened and it’s a start with my new family now without forgetting the old.”

Gwen Griffith said finding out more about Myra’s family was one of their most challenging inquiries.

“Not only was Myra the oldest person who has asked us for help in tracking down their family history but it was also the longest distances.

“The reunion of Myra and Avril with Annette was a wonderful and heart-warming moment and we were thrilled to be able to bring the two sides of the family together after all these years.

“It was quite a challenge to find James’ grave and we were very grateful to have the assistance of the local community in Brazil who were so keen to help.

“It was a very poignant moment when Myra and Avril saw the service they had arranged at James’ grave in the cemetery,” she said.

The episode of Gwesty Aduniad featuring Myra’s story will be shown on S4C on Tuesday, October 4 at 9pm. English subtitles will be available. The programme will also be available on demand on S4C Clic, BBC iPlayer and other platforms.