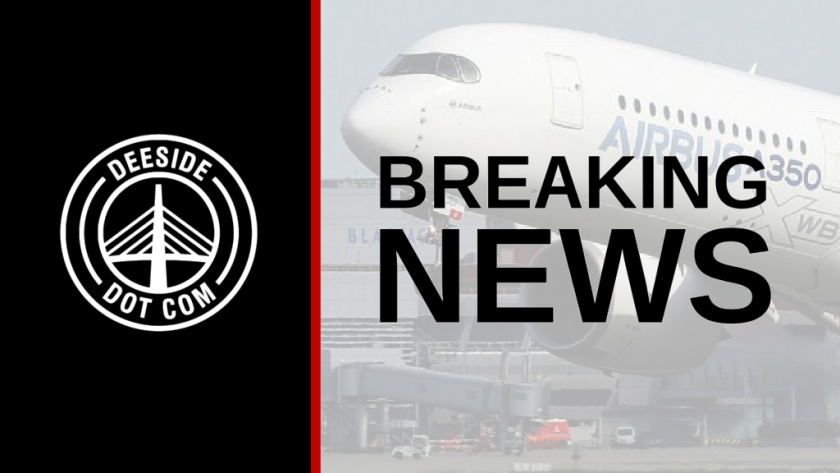 Airbus has said it is to shed 15,000 jobs, 1,700 of which will be in the UK as the plane-maker deals with the effects of the coronavirus crisis.

It’s unknown at this stage how many jobs will be affected at the firms Broughton site where 6000 people work.

The UK job losses will be split between its Flintshire site and Filton in Bristol.

Unions have called  upon Airbus to “hold their nerve and step back from implementing their plan.”

Unite said it will not accept any proposal that “involves compulsory redundancy for our members.”

In a statement this evening Airbus said it is to “adapt its global workforce and resize its commercial aircraft activity in response to the COVID-19 crisis.”

The statement goes on to say: “This adaptation is expected to result in a reduction of around 15,000 positions [globally] no later than summer 2021.

The information and consultation process with social partners has begun with a view to reaching agreements for implementation starting in autumn 2020.

The commercial aircraft business activity has dropped by close to 40% in recent months as the industry faces an unprecedented crisis.

Airbus is grateful for the government support that has enabled the Company to limit these necessary adaptation measures.

However with air traffic not expected to recover to pre-COVID levels before 2023 and potentially as late as 2025, Airbus now needs to take additional measures to reflect the post COVID-19 industry outlook.

Following the in-depth analysis of customer demand that has taken place over recent months, Airbus anticipates the need to adapt its global workforce due to COVID-19 by approximately:

You can read the full statement here: https://www.airbus.com/newsroom/press-releases/en/2020/06/airbus-plans-to-further-adapt-to-covid19-environment.html

During today’s daily briefing, health minister Vaughan Gething was asked if the Welsh government was prepared for a ‘worst case scenario’ at Airbus Broughton, he said:

“On Airbus, but more generally about the economy, we’ve been very clear that the furlough scheme the UK government introduced was very welcome.

We’ve also been clear there’s a potential to withdraw some of that support will accelerate lots of businesses and their choices about whether they can maintain all of their workforce.

There are additional challenges in different sectors of the economy.

I do think it’d be helpful for the UK government to give a clearer signal about the future of a range of our industries and again, it’s a consistent message for Welsh ministers to reconsider how support in the furlough scheme is being managed and withdrawn.

I do think that it will accelerate a wave of job losses, if that decision isn’t revisited.”

Earlier this month Airbus CEO Guillaume Faury suggested the workforce in Britain is more vulnerable to cutbacks than French and German counterparts because the UK furloughing scheme is set to be downgraded shortly.

He said he “regretted” the UK decision to end the scheme, under which the state pays 80 per cent of laid-off workers’ pay up to £2,500 a month, in October.

Around half the workforce at Broughton have been furloughed over a phased period.

In France and Germany job subsidy schemes are set to last for up to two years.

Furlough schemes were “ways of damping the workforce reduction and retaining skills”, Mr Faury told the Financial Times. “If we don’t have that system in the UK, we have to look for more permanent solutions when we could have avoided those . . . for part of the workforce,” he said.

“This is undoubtedly the toughest period the global aerospace industry has ever faced.

Being the largest commercial aircraft company in the UK, Airbus is central to our aerospace industry and has a close relationship with its highly integrated UK supply chain. This difficult news will be unsettling for their employees and those working as part of the supply chain.

“The aerospace industry contributes to the UK’s prosperity and international competitiveness and our highly-skilled workforce is primed to play a huge role in creating the sustainable aircraft of the future. We have already seen tens of thousands of jobs across the aviation and aerospace sectors put at risk as a result of this crisis.

“Government action to support the wider economy has been greatly appreciated across the aerospace industry, but further measures are urgently required to support a strong recovery in our sector.

This should include increased investment in UK innovation, help to recapitalise the supply chain and using public procurement to support high value UK manufacturing.”

500 highly skilled contract workers employed at Airbus by Guidant Global – many of them have been working at Broughton for years – have already been told they face redundancy.