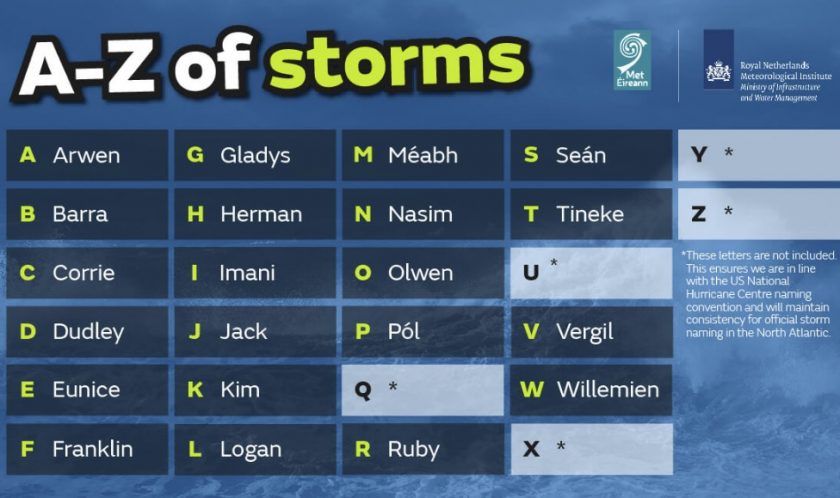 The UK public has chosen to recognise friends, families and pets in the latest storm names which have been announced today.

The Met Office has announced the storm names for use in the 2021/22 season, which runs from September 2021 through to the end of August 2022.

The Met Office works with Met Éireann and Royal Netherlands Meteorological Institute , to agree on the storm names every year.

Over 10,000 submissions were made by the UK public, with the names selected by the Met Office reflecting some of the more popular choices, as well as some of the heart-warming reasons behind the nominations.

“The names chosen reflect the diversity of the UK, Ireland and the Netherlands and the first storm that will be named by the group this year will be Arwen, a name which is thought to be of Welsh origin and was popularised by Tolkein’s Lord of the Rings books. ” The Met Office has said.

Other names included on the list are Kim, Logan and Dudley.

Names were selected on a range of criteria, including whether it is being used by other storm naming groups, whether there have been significant impacts from previous storms with the same name and if it is a name that has already been used in recent years by the group.

Storms will be named by the group when they’re deemed to cause ‘medium’ or ‘high’ impacts in the UK, Ireland or the Netherlands. In addition to strong winds, impacts from rain and snow will also be considered in the naming process.

The naming of storms is intended to help the media and public better communicate the impacts of potential severe weather events, helping people to stay safe and protect themselves and their property ahead of inclement weather.

If a storm has already been named by another storm naming group before it impacts the UK, the original name will be used in communications about it.

Will Lang, Head of the National Severe Weather Warning Service at the Met Office, said: “This is now the seventh year of us naming storms with our European partners and we look forward to continuing to work together with them to raise awareness around the impacts of severe weather in order to help keep people from all nations safe.

“We’re all aware of some of the severe weather that has been witnessed across Europe and globally in recent months and we work to use any tool at our disposal to ensure the public is informed of potential risks, and naming storms is just one way we do that. We know naming storms helps raise awareness of the impacts of severe weather and ensures clarity for the public when they need it most.”

Evelyn Cusack, Head of Forecasting at Met Éireann, said: “Whilst our weather this summer has ended on a settled note, we are now prepared for the autumn and winter with a new list of storm names for 2021-22, whatever the weather may bring.

“Met Éireann forecasters look forward to another season of working closely with our colleagues at the Met Office and KNMI, by continuing to provide a clear and consistent message to the public and encouraging people to take action to prevent harm to themselves or to their properties at times of severe weather.”

KNMI Director General Gerard van der Steenhoven said: “Storms are not confined to national borders, it makes a lot of sense to given common names to such extreme weather events. We gladly continue our collaboration with the UK Met Office and Met Éireann on storm forecasting. It is a great privilege and advantage to work in close co-operation with our colleagues from Ireland and the UK in the communication about storms. All people exposed to such impending extreme weather events will benefit.”