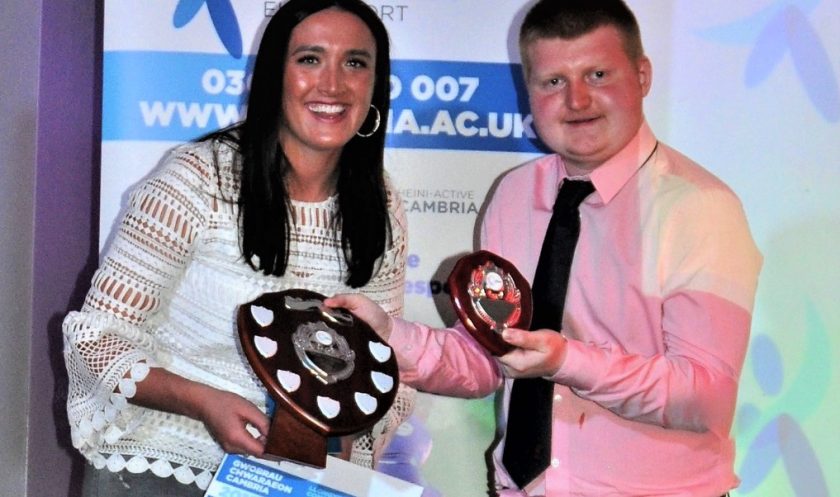 A world champion martial artist and a Special Olympics all-rounder were among the winners at the first ever Coleg Cambria Sports Awards.

Taekwondo star Matthew Cook was named Elite Individual Athlete of the Year at the prizegiving, held at the Centenary Club in Wrexham AFC’s Racecourse stadium.

One of the best young players in the world, Matthew has picked up dozens of titles over the last two years and is a reigning World, British and Welsh light-heavyweight champion.

The netball squad were named Elite Team of the Year, and biggest cheer of the night went to all-rounder Jack Rowland, an ILS (Independent Living Skills) Skills Entry Level 2 student.

Jack was player of the season for Cambria Dragons football team and named Cambria Elite Sportsperson of the Year following a vote by his peers and those in attendance.

A former pupil at Dorin Park School in Chester, he refused to allow learning difficulties to come between him and sporting success.

The 21 year-old, from Hawarden, excels in a wide range of activities, representing Cambria in boccia (bowls), football, golf and basketball.

Mum Sarah revealed that Jack felt “amazing” to have been chosen from such a talented pool of students, adding: “We were both so shocked, it’s absolutely brilliant he has been recognised and celebrated in this way as often people with learning difficulties are ignored.

“Jack is obsessed with sport, it’s the biggest thing in his life and he has to do a high level of physical activity to keep his body mobile.

“He wants to carry on volunteering and playing different sports, as well as representing the college and this region, as he has successfully over the years with the help of many people, including Dragons coach Steve Pearson.

“Thank you so much to everyone at the college, it was a wonderful night, one we will never forget.”

Jack has competed in football competitions across Wales for Brickfield Rangers All Stars (2007-2016) and is a member of the Ellesmere Port, Neston and Chester Special Olympics football team.

He won the Cheshire West and Chester Sports Awards Adversity Award in 2015 and is currently a member of the North West Special Olympics equestrian side, competing in regional dressage and equitation contests.

Aiming to compete at the National Games in Liverpool in 2020, Jack has even found time to gain a Duke of Edinburgh silver award and has completed three work placements, including this year at Sports@Deeside and Lifestyle fitness.

Sally Jones, Deputy Director of Sport and Uniformed Public Services at Coleg Cambria, said Jack and all the winners are a credit to the college.

She also paid tribute to the speaker on the night, Wales netball star and Cambria alumnus Fern Davies, from Holywell, who played for her country in the Commonwealth Games and is now in the Armed Forces.

“Jack is an amazing student and sportsman, and everyone was in agreement that he should be our Elite Sportsperson of the Year,” said Sally.

“As well as everyone who came to the awards can I thank our coaches and staff who work so hard with the individuals and teams at Cambria to help them achieve success.

“That also goes for our partner organisations, including Wrexham AFC, Cefn Druids AFC, Connah’s Quay Nomads, the WRU and RGC, who have given us so much support.”

For more on sports and leisure at Coleg Cambria, visit the website: www.cambria.ac.uk