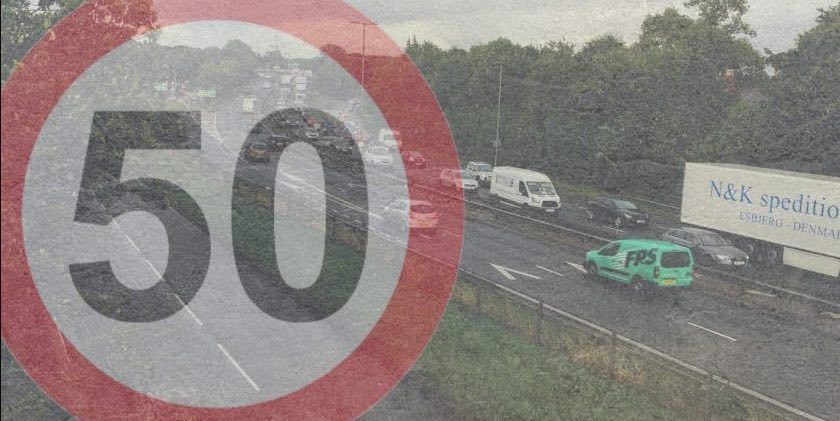 A ‘temporary’ 50mph speed limit along the A494 in Deeside – which has been slammed by drivers as being dangerous – is set to be permanent from mid-July.

Back in January, Energy, Environment & Rural Affairs Minister, Lesley Griffiths said temporary 50mph limits on the A494 Deeside as well as the A483 Wrexham,  M4 Port Talbot,, A470 Pontypridd, and M4 Newport would be kept for as long as they’re deemed necessary.

The reduced speed limits were introduced last summer as part of a Welsh Government plan to cut high levels of nitrogen dioxide on roads across Wales where emissions have been found to exceed legal limits.

Lesley Griffiths updated AMs this week on measures the Welsh Government were taking to address air pollution and she confirmed the 50mph limits will be made permanent.

“I am pleased to announce that 50mph speed limits will be in place on a permanent basis across all five sites by the middle of July.

We will be enhancing communications around the reason for the speed restrictions and providing new permanent traffic sign layouts at all sites so that the public is aware of the importance of these measures.”

Regular A494 users say the road has now become dangerous since the speed was cut as many drivers are choosing to flout the 50mph limit on what was a 70mph stretch of road.

Following the update from the Environment Minister, Andrew Davies AM picked up on the 50mph point, noting that such speeds would be “a dream for many people” on the M4, adding:

“I wish you well on your public information campaign, but, if you’re saying about 50 mph, most people would say you dare not get close to 50 mph at most times of the day on that particular motorway.”

Lesley Griffiths replied with the A483, which runs through her own constituency, in mind rather than the M4:

“You mentioned the five 50 mph sites. This is a really interesting thing that we brought forward. I actually have one in my own constituency, so obviously I know that one the best. I’m waiting to hear what the outcome is of that 50 mph zone.

My concern is that people are not keeping to it. I’m going along at 50 mph and people are overtaking me, I would say, all the time. I think one of the areas where I do have concerns—and this will be addressed when we bring the five sites forward on a permanent basis—is that people don’t understand why they are 50 mph sites.

We’re working on that signage, because certainly I’ve heard people say in Wrexham that they think it’s because of speed and why aren’t the police enforcing it.

I think we need to make the public aware of why we’ve brought them in and why we’re going to make them permanent.”

The government says speed limit enforcement along the 50mph stretch of the A494 is “approached as speed limits on other roads” however, data taken from Inrix traffic statistics show the average speed of vehicles using the A494 is nearly 60 mph. 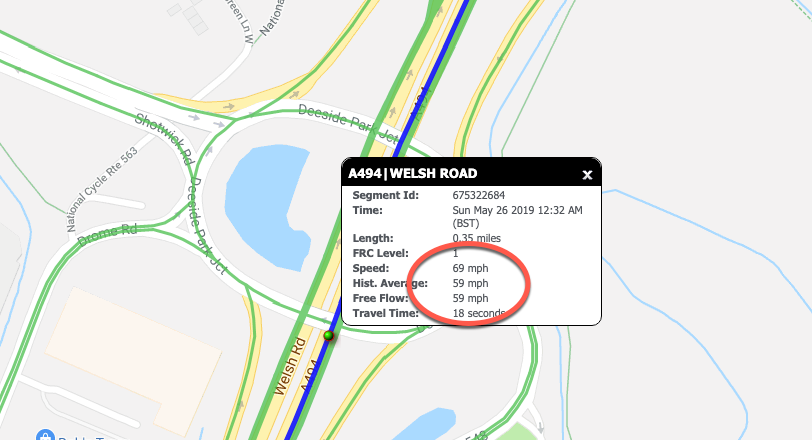 [Inrix data – Using data from traffic monitoring website INRIX the average vehicle speed measured on the Sealand stretch of the A494 is 59mph –9 mph above the speed limit.]

Electronic signage was introduced to promote a ‘smooth traffic flow’ in a bid to help reduce the high levels of nitrogen dioxide, and the installation average speed cameras to help enforce the speed limit was recommended in a report published last year

“The 50mph speed limit on a section of the A494 has been implemented to reduce nitrogen dioxide levels which are currently above legal limits.

Enforcement is currently approached in the same way as other speed limits on the trunk road network.

However, Welsh Government officials are continuing discussions with the Police and GoSafe about the most appropriate method of enforcement going forward including the possibility of installing average speed cameras to help ensure 24 hour a day compliance.”