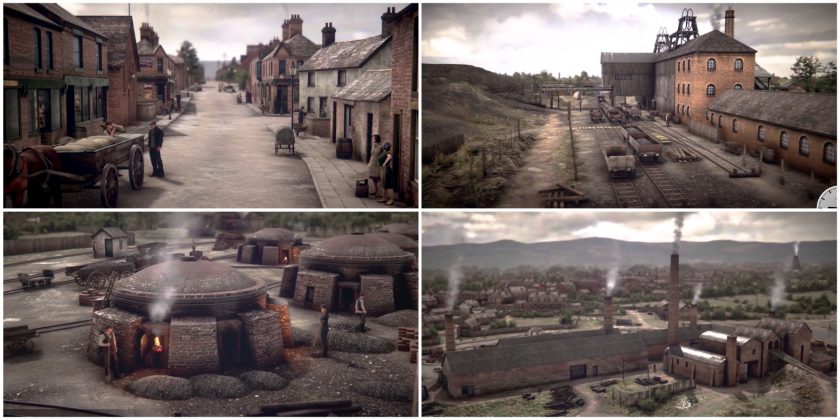 A stunning computer-generated short film visualising Buckley in the early 20th century will help show youngsters the industries the town became famous for.

Martin’s previous work includes a number of films showcasing the evolution of Flint Town and Castle over the past 700 years and video visualising a Spitfire training over Talacre Beach during World War 2.

Locations featured in the video include Hancock’s Brickworks which was established 1792, situated in Church Road, the last brick was made there on the 7th March 2003.

Mountain Colliery which operated between 1897 and 1929 was situated on the common opposite Mountain Lane C.P School, Knowle Lane where Mountain Close now stands.

Hayes’ Old Ewloe Pottery was situated in Etna Road where Etna Court now stands. It was established in 1760 and closed circa 1942.

Wilkinson’s Smelt was situated in an area that has since been developed for housing between Wilkinson Court and Pemba Drive. It was built in the early 1790’ s and demolished in the mid 1960’ s.

Paul Davies, Secretary of Buckley Society, which commissioned the film, said: “Many hours of work have gone into its compilation and Martin Moss is to be congratulated on the lengths he has gone to in recreating the scenes in such detail.”

“The film has been compiled from old photographs, maps and sketches contained within the Buckley Society archive plus information passed down over the years.”

“It recreates as best as possible, scenes at Hancock’s Brickworks, Lane End, Mountain Colliery, Old Ewloe Pottery, and you also see glimpses of the Smelt built by John (Iron Mad)Wilkinson.”

“It will prove extremely useful to show the younger generation particularly those in schools to see a sample of the industries that made Buckley so famous for its products.”

The three and a half minute film is one element of the ‘Revealing Buckley’s Heritage’ project, people visiting the town can now learn more about the history of the town through a new digital trail experience.

In 2019 the Buckley Society received a National Lottery Heritage Funded grant towards the creation of a digital trail around the town as part of the ‘Explore North East Wales’ tourism initiative to encourage people to explore this fascinating area.

In addition, the project included the production of a 4-sided visitor information point, packed with information about the past history of the town which has now been erected in front of the main shopping precinct in Brunswick Road.

The bilingual Buckley digital trail is now live, highlighting dozens of locations and facts of interest and filled with photos and information about the town as well as fun features.