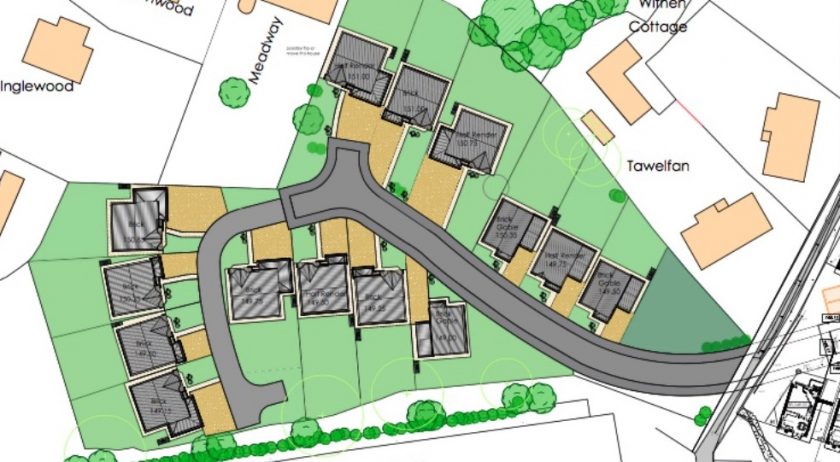 Plans to build 14 new homes in Buckley have been given the go ahead following a successful appeal, despite fears for the safety of school children.

Flintshire Council’s planning committee rejected proposals by Quatrefoil Homes to develop land on Alltami Road at a meeting in November.

It followed  around 50 letters of objection being submitted by residents, who raised concerns about the impact on a footpath, known locally as ‘Tucky Lane’, which is regularly used by pupils walking to Elfed High School.

However, the decision made by councillors has now been overturned after a planning inspector appointed by the Welsh Government found in favour of the Mold-based firm.

Aidan McCooey said the development would not impact on the safety of youngsters using the footpath.

Outlining his conclusions, he said: “The evidence in this case leads me to conclude that the proposed crossing of footpath 22 can be achieved in a safe manner.

“The proposal would not cause harm to users of the footpath, including school children, or users of the existing and proposed highways.

“I note that the council’s professional highways officers concluded that there was no highway safety reason to refuse planning permission based on the evidence.

“Having considered all the matters raised including the content of the committee reports, I conclude that the appeal should be allowed.”

The proposals went before the committee in November with a recommendation for approval from planning officers.

In a report, the authority’s chief planning officer Andrew Farrow, said the proposed road layout was considered to be acceptable.

He added that an alternative route would be provided for pupils during the construction of the houses, with upgrades to be carried out to the path.

However, at the meeting, Buckley Mountain councillor Carol Ellis led the concerns about the development.

She said: “I am totally, utterly opposed to this application, mostly on the grounds of safety.

“You could not fail to be shocked when you arrived on the site visit to actually see the proposal and to see the implications to footpath number 22, which has been free of traffic I’m told locally for 60 years.

“It’s very well used by the community, especially by the school children.

“I’m sorry if I’m being quite blunt but it’s the safety of children and there are lots of other issues I could mention.”

The proposals will now go ahead, but Mr McCooey has attached a condition requiring barriers and a temporary footpath to be put in place before the development gets underway.