Two Flintshire villages whose close links are celebrated by a popular saying could be torn apart, it’s been warned, after the outcomes of a boundary review were made public.

The long association between Caergwrle and neighbouring Hope has given rise to a well-known local joke: “Live in Hope, die in Caergwrle”.

However, a report published by the Local Democracy and Boundary Commission (LDBC) shows Hope is set to be paired off with Higher Kinnerton as part of a new council ward area represented by two councillors.

Meanwhile, Caergwrle would be merged with Llanfynydd and Treuddyn as part of another two member ward.

Married couple Dave and Gladys Healey, who represent the two villages on Flintshire Council, previously wrote to the commission to call for them to be united to create a single ward due to their historic links.

They have now launched a petition to lobby the Welsh Government, which will have the final say on the proposals, not to proceed with the changes.

Gladys, who represent Hope, said: “The two communities of Hope and Caergwrle are really one settlement with a long heritage of close links.

“The saying ‘Live in Hope, Die in Caergwrle’ is known all over the world.

“I realise that the job of the LDBC is to adjust boundaries but community cohesion needs to be taken into account.

“These arrangements continue to drive a spear through the heart of our community.

“Hope and Caergwrle has come together like never before during the covid pandemic with volunteers providing vital support for vulnerable people across the two communities. 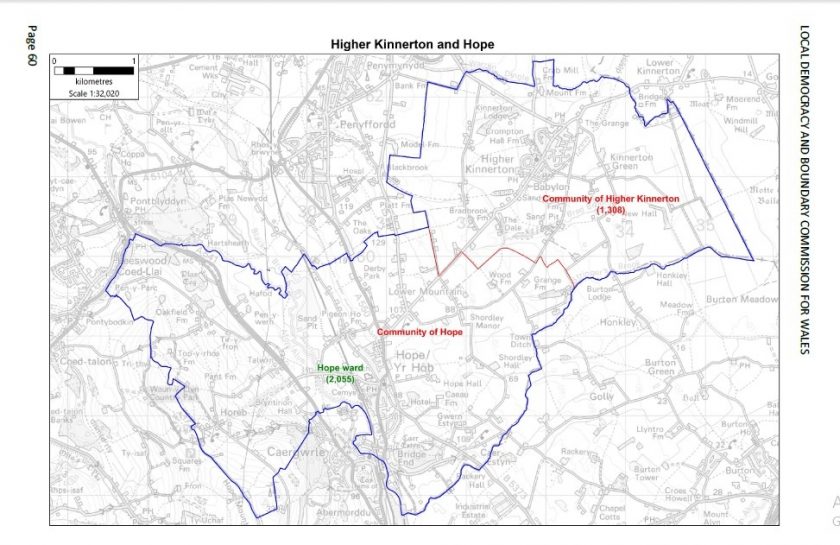 She added: “Moving forward we need to build on this for the sake of community resilience.

“Covid will not go away overnight and now that we are being hit by the devastating news about Airbus people are going to need to be able to access further support.”

The LDBC proposals would see the number of councillors in the county reduced from 70 to 66.

The changes would also result in the amount of electoral wards being slashed from 57 down to 42.

The commission said its plans were designed to achieve a balance of one councillor for every 1,809 eligible voters in the area.

However, Dave, who represents Caergwrle, said it would lead to communities being “fractured”.

He said: “The idea of combining the wards of Caergwrle, Llanfynydd and Treuddyn into a two member ward has come like a bolt out of the blue.

“It was never one of the original proposals put out for consultation.

“The names of the separate wards have been kept but that is all.

“They have been merged and effectively destroyed in all but name.

“It is no improvement for democracy if engagement is made more difficult.

“People need support at this difficult time, not the fracturing of vital community links.”

The commission’s report acknowledges the strength of feeling in both communities after a string of objections were received.

But it proposes going ahead with changes which would see Hope and Caergwrle split off “in the interests of effective local government”.

It states: “The commission acknowledge the high level of representations submitted during the consultation period, however, it is of the view that the recommended arrangement best addresses the existing levels of electoral variance.

“The commission is of the view that it would not be appropriate to retain the existing electoral arrangement for Higher Kinnerton due to the high level of electoral variance.

“The commission considers that these recommendations would be desirable in the interests of effective and convenient local government.”

The proposals will need to be approved by the Welsh Minister for Housing and Local Government Julie James.

The petition launched by the two councillors currently has 162 signatures and can be accessed by visiting https://petitions.senedd.wales/petitions/200183?