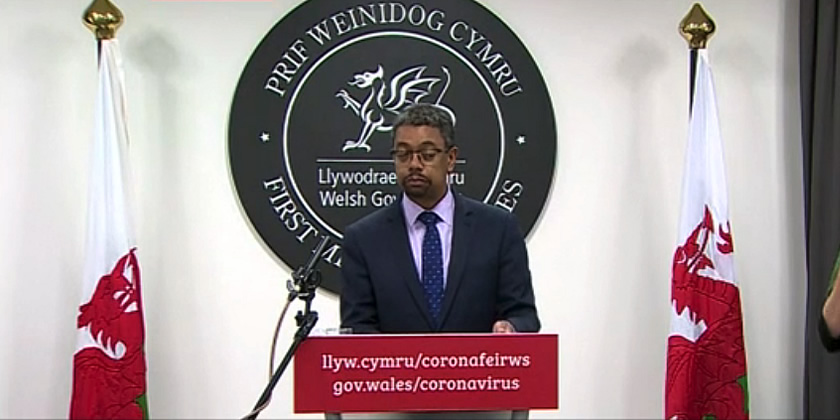 The Welsh Health Minister has insisted people living in North Wales are not receiving a lesser service after almost 1,700 mental health patients were wrongly discharged.

Betsi Cadwaladr University Health Board apologised last week after it was revealed a significant number were released from local mental health services due to the coronavirus pandemic.

Senior figures said the decision was taken due to a misinterpretation of Welsh Government guidance.

It led to calls for Health Minister Vaughan Gething to explain how the situation was allowed to happen when the trust has been under special measures since 2015.

The highest level of government monitoring was first implemented following a damning report into failings on the Tawel Fan mental health ward at Ysbyty Glan Clwyd.

Mr Gething defended the health board’s performance during the COVID-19 crisis at today’s daily press briefing following a question raised by the Local Democracy Reporting Service.
He said: “The health board recognised that a mistake was made in discharging people when it shouldn’t have happened.

“That can happen in any or every organisation – even large organisations that have a record for excellence occasionally get things wrong.

“Actually, I think what you’ve seen across the whole health service, including in North Wales, is a tremendous appreciation from the public for the high quality of their local health service and the compassion and the commitment of health and social care staff.”

He added: “I think there’s a renewed sense of understanding of how fortunate we are to have the National Health Service here in Wales.

“I don’t think you could look at Betsi’s response to the coronavirus pandemic and see there have been real and significant challenges and that people in North Wales are getting a lesser service than other parts of the country. That is simply not the case.”

Betsi Cadwaladr officials said the the discharge of services applied only to primary care mental health patients, for example, those who receive GP referrals for services such as counselling, and not inpatients.

It said it would be contacting all those impacted so they could be reinstated.

Mair Elliott, chair of Hafal, said she first raised concerns over services being reduced at the start of April.

However, she said she only received “vague assurances” from Mr Gething that health boards were managing the situation.

When asked whether he felt the government’s advice had been clear enough, the Health Minister said: “The guidance has been very clear and Betsi Cadwaladr acknowledge they’ve made a mistake in discharging people.

“They are looking to recover all of those issues to make sure that people have still got the advice and support that they require.

“It’s one of my concerns more broadly about the impact on the mental health of people across the nation of all ages, because that disconnect with normal social interaction, we know is a real challenge.

“That’s why we’ve looked to try to prioritise measures that allow people to see others, and that should have a positive impact across the country.”