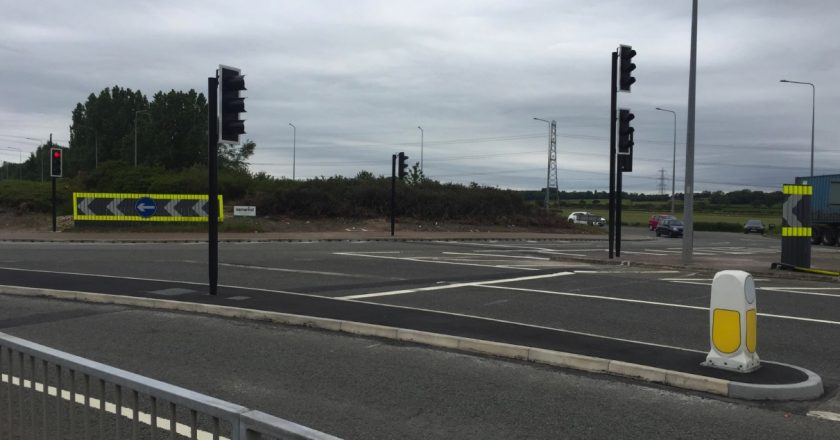 Flintshire Council says it has received a number of positive comments following the installation of traffic lights on that A548 Parkway roundabout.

The new lights have been introduced in a bid to reduce delays for vehicles leaving Zone 2 of the estate at peak times.

Work on the project took around six weeks to complete and caused huge delays on several occasions for drivers attempting to enter and leave the estate.

Deputy Leader of Flintshire County Council, Carolyn Thomas said she has received several “positive emails” regarding the “massive and unbelievable” difference the new traffic lights have made.

The signals have been designed to reduce the delays for vehicles leaving Zone 2 of the Deeside Industrial Estate at peak times of the day.

During the 6 weeks of construction which included off peak and night time working some unexpected delays were encountered.

Following the installation of the Parkway Roundabout signals Flintshire County Council has received several positive comments from members of the public and businesses.

Monitoring has been undertaken at peak times which has highlighted a reduction in travel time whilst exiting the park.”

Chair of Deeside Business Forum Askar Sheibani said he was delighted with the latest improvements.

Mr Sheibani said, “Deeside Industrial Park is so successful that there had been some major traffic problems.

We lobbied Flintshire County Council to resolve these issues so that the park can continue to thrive and grow.

As a forum we’d like to congratulate them on the way they have prioritised Deeside Industrial Park for major capital spend, despite budget cutbacks.

The improvements in Zone 3 are a great example of their successful investment and this recent installation of traffic signals on the Parkway Roundabout has drastically cut delays for traffic leaving Zone 2.”